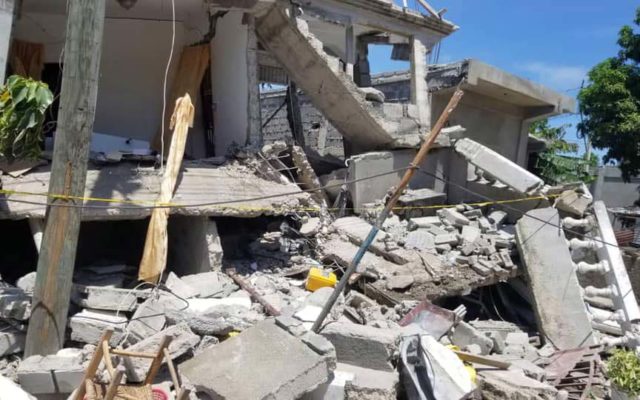 EAGLE GROVE — A north-central Iowan is back in the state after experiencing the earthquake in Haiti last Saturday.

The quake was measured at 7.2 on the Richter Scale and caused damage and deaths — and was followed by Tropical Storm Grace. The founder of the Eagle Grove-based GoServ Global, Ken De Young, road out the earthquake. “Fortunately for us, none of our kids in our five different orphanages were killed. Some scrapes and bruises and those sorts of things — but the kids are all good,” De Young says.

He says they did suffer some losses. “We have friends and acquaintances, families from church that we know who were killed. It just seems so complete when a concrete building goes down, it takes a lot of people with it,” De Young says. “I heard 85,000 people lost their homes and the death toll has been counted up to a couple thousand now and I am sure that is not going to be an end to it.”

GoServ Global created what are called SafeT homes out of grain bins following the 2010 earthquake in Haiti, and he says they survived this earthquake. Members of the organization were handing out food and Wednesday he says they were taking medical supplies to residents.

“To areas where they can’t get to our clinic or hospital. A couple of the hospitals were heavily damaged — so that adds to the difficulty of this,” De Young says. DeYoung is returning to Haiti this weekend with supplies and equipment to aid the victims of the earthquake and the storm.

He says donations are needed. “The quickest way to help is with finances. It’s expensive and we can turn cash into supplies and buy them on the ground in-country or in Florida,” according to De Young. “That’s the biggest thing. We are shipping more SafeT homes, but that has to go by boat and it will take two or three weeks to get there.” He says you can trust your donation will go to good use.

“We’re pretty committed to making sure the dollars are used wisely. And that’s one of the things that drives GoServ Global is to be hands-on and make sure those dollars go as far as they can,” he says. You may make an online donation at goserveglobal.org or by mailing a monetary gift to GoServ Global at P.O. Box 193 Eagle Grove, Iowa 50533.