BOONE — The Iowa High School Athletic Association on Monday released the first edition of their inaugural basketball rankings for all four classes. The rankings will be determined throughout the season by official rankings committees as suggested by the IHSAA basketball advisory committee. The new rankings system will eliminate the early release of substate and district assignments by having the association coordinate all brackets throughout the postseason, using the regular season rankings as a primary tool for postseason assignments while maintaining school and geographic considerations. Clear Lake is the only area school appearing in the initial rankings, being 7th in Class 3A. Looking at the full rankings:

IOWA CITY — With leading scorer Kris Murray sidelined with an injury, senior center Filip Rebraca has helped pick up the slack at Iowa. Rebraca has averaged nearly 21 points and more than nine rebounds the past three games. That includes a career high 30 points and nine boards in Saturday’s win over Southeast Missouri.

The Hawkeyes are 9-3 and host Eastern Illinois on Wednesday night. Tipoff is scheduled for 7 o’clock with the pre-game at 6 o’clock on AM-1300 KGLO.

IOWA CITY — With final exams over, the Iowa football team has resumed preparations for the Music City Bowl. The Hawkeyes play Kentucky on New Year’s Eve in Nashville.

That’s Iowa coach Kirk Ferentz who says the added practice time is a plus, especially for younger players.

Between players entering the transfer portal or opting out to enter the NFL Draft, roster management can be tricky for a bowl game.

Kickoff for the Music City Bowl is scheduled for 11 o’clock on New Years Eve, with the pre-game at 9 o’clock on AM-1300 KGLO

DES MOINES — The Iowa Girls High School Athletic Union announced on Monday the four sites for wrestling super-regionals to be held on January 27th. Due to the large number of participants, each site will have two separate regional tournaments that will qualify the top four placewinners on to the state tournament.

The state tournament will be held at the Xstream Arena in Coralville on February 2nd and 3rd.

== In Class 1A, Don Bosco is the top team followed by Alburnett, Lisbon, Nashua-Plainfield, and Wilton in the top five. West Hancock is ranked 12th, Lake Mills 13th, and Central Springs is 27th.

== In Class 3A, the top five are Bettendorf, Southeast Polk, Waverly-Shell Rock, Ankeny and Linn-Mar.

Click on the graphic below to see the full rankings 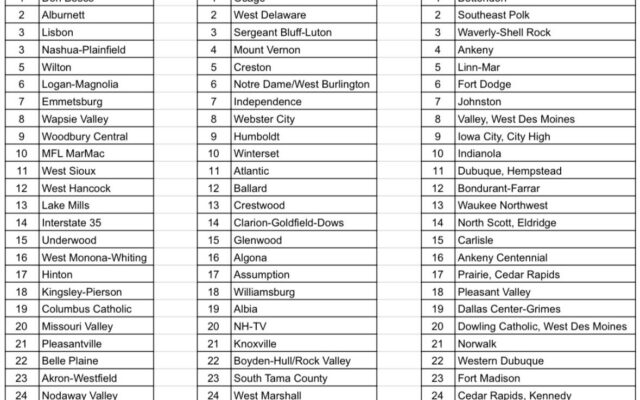