Tornadoes reported in Pella and other cities Sunday 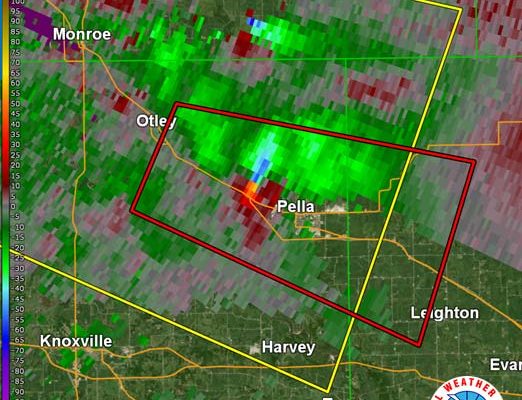 Tornado on NWS Radar near Pella

JOHNSTON — At least one — and as many as four — tornadoes touched down in Iowa last night, though the damage is limited to a few farmsteads, and no one is reported hurt.

Meteorologist Allan Curtis, at the National Weather Service in Johnston, says a survey team is headed out this morning to assess the damage in parts of Marion and Mahaska counties.

“There was at least a brief tornado that touched down just to the northwest of Pella proper,” Curtis says. “Fortunately, it does not look like there were any injuries or any true, significant damage. Obviously, any damage to buildings or to people’s personal property is unfortunate.”

There are scattered reports of hail across much of Iowa’s eastern half, including a report of ping pong ball-sized hail near Wellman and egg-sized hail near Afton. “In a lot of cases, you’d almost call it a stereotypical early summer thunderstorm-severe weather event for the state,” Curtis says. “It’s not unusual for us, obviously, to see hail upwards of two-plus inches at times.”

After several weeks of dry weather, large areas of the state got rain over the weekend, including reports of between two and four inches of rain in southeast Iowa. Even with that much precipitation, there were no reports of flash flooding as the dry soil was able to soak it in.

“The good news is, we got some rain across the state and of course, the bad news goes hand in hand with it on occasion with the tornado here in Pella,” Curtis says. “I know east of us in eastern Iowa, there was another one or two tornadoes that our sister station in the Quad Cities is going to go survey.”

There were unconfirmed reports of possible tornadoes last night near Dubuque, Fort Madison, and Washington. The storms leave behind much cooler weather. After record highs in the upper 90s and low hundreds last week, forecasters say highs today statewide will only be in the 60s and 70s, though warmer weather is expected to return on Tuesday.