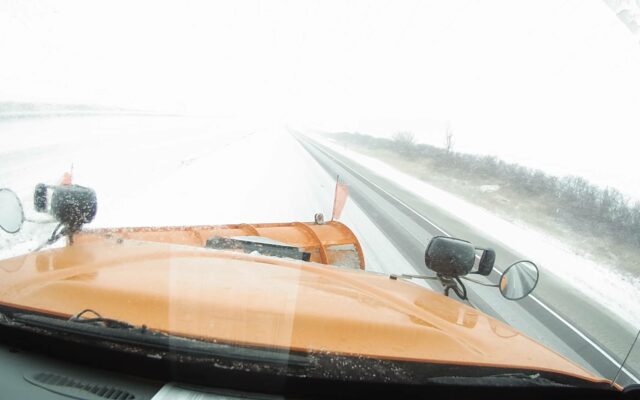 View from an Iowa Department of Transportation snowplow cam just south of Clear Lake on Interstate 35 at 11:30 Friday morning, January 14, 2022

MASON CITY — Parts of western Iowa could get snow late tonight and into Saturday, with some forecast models showing the potential for several inches of accumulation.

While snow is not mentioned in the north-central Iowa forecast, conditions can change quickly and Iowa Department of Transportation Mason City office spokesman Pete Hjelmstad  says if there’s frost or snow covering your vehicle’s windows, it should be a no-brainer that you clear them off before trying to drive.  “Unfortunately, many times, when I’m driving to work at 6:45 in the morning and I see people driving down the road and I really don’t know how they can see when I see their windshields,” Hjelmstad says. “You also see reports on social media a lot of times of the State Patrol or Motor Vehicle Enforcement or county sheriff’s or local city police departments pulling people over because their windows are not cleaned off.”

Hjelmstad says Iowans may need to brush up on their winter driving skills. No matter what the weather, drivers need to slow down, which is something he says hasn’t changed since the early days of the pandemic.  “The theory is that there was so little traffic on the roads, and the roads were wide open, that people just felt they could drive fast and they have not changed their habits. There’s a lot of crashes because of speeding,” Hjelmstad says. “You are seeing a lot of times law enforcement posting pictures of somebody pulled over and their radar, and the radar is triple-digits. It’s beyond ridiculous.”

He says motorists would be wise to look before they leap into the driver’s seat.  “Know what you’re getting into, check the weather forecast, check the 511 app,” he says. “Being prepared is knowing what’s out there.”