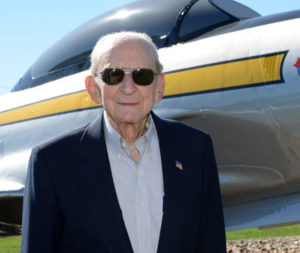 A World War Two veteran who was a charter member of the Iowa Air National Guard and former commander of the 185th Air Wing has died at age 97.

Colonel Warren “Bud” Nelson served in the military for almost 40 years. Brigadier General Larry Christensen, a recent commander of the 185th, says Nelson was a true pioneer of the Air Force.

“He was there at the beginning of the Air Force in the Air National Guard come out of World War Two. And so then you think about those guys and what they did, I guarantee there wasn’t a how to book back then, how to start an Air Force how to start an Air National Guard,” he says. “And that’s why I always say to retirees, especially up there at the 185th, that we’re standing on their shoulders, they’re the ones that created the foundation.”

Nelson had been working as a P-51 instructor pilot after World War Two and was determined to continue flying. At the age of 21, with three years under his belt, he moved to Sioux City to join the newly formed 174th Fighter Squadron. There he continued to fly the P-51 Mustangs until 1950 when he switched to the jet powered F-84 Thunderjet. Christensen says Nelson was unique in flying several different aircraft.

“A lot of people they only fly one airplane. I was lucky enough to do three, but he actually did eight,” Christensen says. “So again, we go back to the history that he had, the knowledge that he had, you know the different experiences. We’re gonna be hard pressed to find anybody with that kind of experience.”

Nelson volunteered to became part of the world’s first nuclear fighter bomber wing when he and other 174th pilots were assigned to the 20th fighter bomber wing in Europe. They flew regular missions along the West German border as a show of force against Soviet occupied East Germany. The 174th eventually grew into the 185th tactical fighter group which was assigned the F-100 super saber and was activated again in 1968 for the war in Vietnam. Nelson became the wing commander in 1976 and went through his final airframe change when the unit transitioned to the A-7 corsair in 1977, and then retired in 1980.

Christensen says with all that Nelson accomplished, he was very humble about it. “He’d sit and talk to you for as long as you want to talk — but he definitely wasn’t a person to brag. Even though he had the rights to do so, he never did,” Christensen says. Nelson was a native of Jackson, Minnesota, but called Sioux City home for most of his life, and continued to live here after his retirement in 1980.