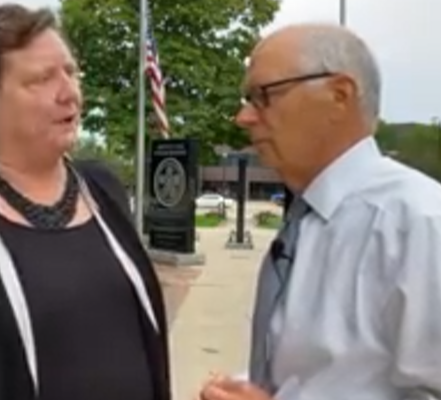 MASON CITY — An event commemorating the 20th anniversary of the terrorist attacks on the United States will be held in downtown Mason City on Saturday morning.

Joan Platz of Mason City is a retired Navy captain who was part of the second graduating class from the United States Naval Academy that included women. Platz flew helicopters and was stationed in Italy and the Persian Gulf and was also the commanding officer at Naval Air Station Whiting Field in Florida.

Platz was serving at the Pentagon on the day of 9-11.   “I was standing at my desk working on some stuff when we got the call that a plane had hit a tower in New York. I worked in naval aviation, so they were wondering if we were missing a plane. We weren’t, and we watched the second attack and shortly thereafter we felt the third attack.”

Platz says a remembrance like the one to be held on Saturday is important because the event changed the nation. “We suddenly felt more or less invincible, and I think it’s important to reflect on the courage of our first responders who knowing what happened that day still volunteer to do for us what they do. I think it’s important to take the courage of the members of Flight 93 and do what they asked us to do, let’s roll and let’s make America a better place.”

Platz made her comments during a social media post made by Mason City Mayor Bill Schickel, which you can see below.

The ceremony starts at 8:59 AM at Central Park. If you cannot make it to the ceremony, you will be able to watch it on the KGLO News Facebook page on Saturday morning.