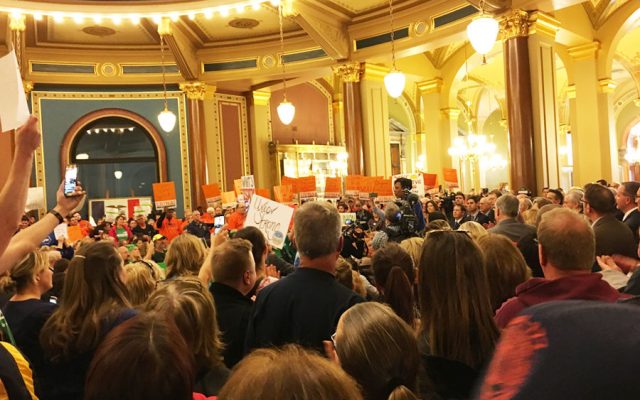 A crowd in the State Capitol’s first floor rotunda

DES MOINES — The Iowa House has voted to ban demonstrations on the second floor of the Iowa Capitol building.

The chambers where the House and Senate debate are located on the second floor, with a large, open rotunda in between. The new policy would ban chanting, rallies and marches on the second floor. Representative Brent Siegrist, a Republican from Council Bluffs, said it would ensure “ordinary citizens” can come to the Capitol and speak with legislators in the second floor rotunda.

“Demonstrations are perfectly fine and encouraged if you want outside the Capitol, at the basement or on the first floor,” Siegrist said, “but they would not be allowed outside the chamber.”

Siegrist said demonstrations in the area right outside the House and Senate can be disruptive as legislators debate. The new rule is primarily designed to ensure “the health and safety of elected officials, employees (of the legislature), the public and lobbyists.” People in the area would still be able to wear buttons and t-shirts carrying a political message under this new policy, but banners and posters would.

The proposal is included in procedural rules the House unanimously approved yesterday, but the Senate has not voted on the package yet.

Demonstrations are already prohibited on the Capitol’s third floor. That’s where the seating galleries overlooking the House and Senate chambers are located.