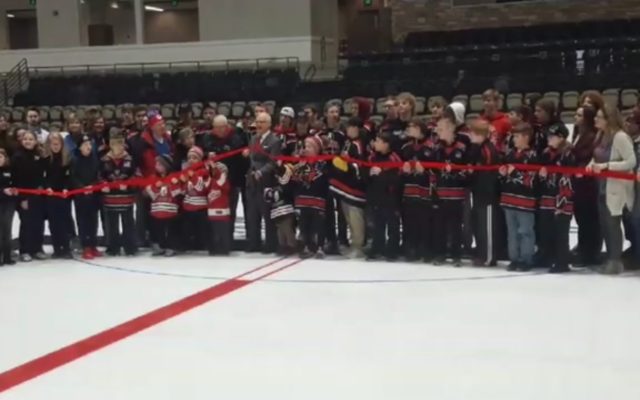 MASON CITY — The ribbon-cutting ceremony was held this morning for the Mason City Multi-Purpose Arena. The arena is one of the four components of the River City Renaissance project that is financed with the help of the Iowa Reinvestment Act, with the goal of repurposing Southbridge Mall. Mayor Bill Schickel says today’s celebration caps the first and biggest phase of the project.

City Administrator Aaron Burnett says he’s been pleased to work the on downtown project since assuming the job.

Burnett says many people have to be thanked for making the arena project happen.

Burnett says the results of the original vision of the arena have already been exceeded.

The first public event for the arena will be this Sunday with “Skate with Santa” from 1-4 PM. People wanting to skate are asked to bring a non-perishable food item for the Hawkeye Harvest Food Bank. The first sporting event in the new arena is scheduled for Saturday December 28th when the North Iowa Bulls play their first game.

The program manager of the Iowa Economic Development Authority’s Iowa Reinvestment Act Program, which is helping to finance the River City Renaissance Project, was in Mason City for today’s ceremony. Alaina Santizo says she’s happy to see the largest phase of the project completed.

Santizo says the board is pleased with the progress of the River City Renaissance Project despite some delays.

Santizo says IEDA is keeping track of the rest of the projects that are tied into the project.

The IEDA Board had contingently approved a maximum benefit of almost $9.2 million for the downtown project through the state’s Iowa Reinvestment Act. The $38 million Renaissance project includes the new multi-purpose arena, a $24 million, 112-room Hyatt Place hotel in the eastern part of the main parking lot of the mall, a convention center complex that includes the hotel and Music Man Square, and a performing arts pavilion on the mall’s north side.