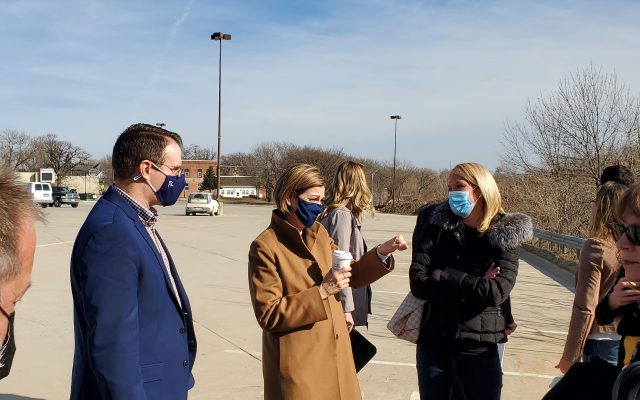 MASON CITY — Governor Reynolds stopped in Mason City late Friday afternoon to tour the Willow Creek Riverwalk project area and the new housing development “The River” that’s just south of Southbridge Mall. The city earlier this year received notification that they’ll be getting a $150,000 grant from the Iowa Great Places program to put towards the project.

Reynolds says she’s been impressed with the development that’s been taking place in Mason City.  “Every time I come up here, I see another project that they’ve talked about that’s been completed, so it’s really exciting to see the growth and what’s transpiring here, and just the vision to continue with the Riverwalk and just to continue the development and really tie all of this positive development together. We’re sitting in front of a new housing complex that’s 95% occupancy, that’s pretty good. So they are doing a great job.”

Reynolds says programs like Iowa Great Places and others are helping revitalize communities like Mason City.  “One of my major priorities this year is workforce housing, and that’s another driver when it comes to building developments like this. There’s a backlog and so I want to double the funding for that for three years at least, and not only have it available for the urban areas but also carve out for rural Iowa as well, so we don’t have a backlog in either area. The Brownfield-Grayfield is another great project that they are able to utilize. It is ending so we want to extend that, and we want to double the funding for that. There’s a couple of other programs that we’re working on as well.”

The City Council in Mason City Tuesday night is being asked to approve a professional services agreement with Bergland and Cram for the design of the Riverwalk project. Construction would potentially start in the spring of 2022 with completion in the spring of 2023.