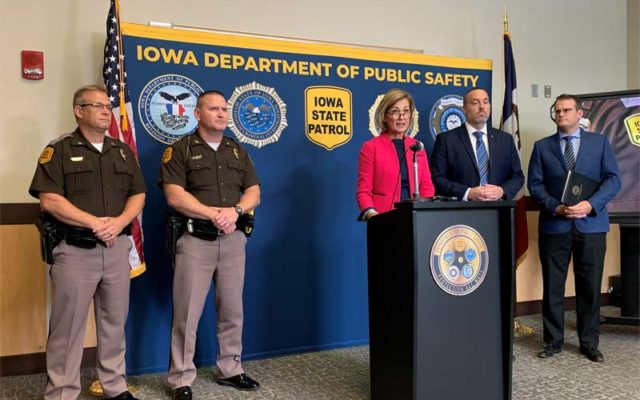 DES MOINES — Governor Kim Reynolds says it is “counterproductive” for the Centers for Disease Control to issue new guidelines recommending people wear face masks indoors to prevent the spread of the new, easier to transmit strain of Covid-19.

“It’s frustrating. It’s confusing. They’re sending mixed messages constantly,” Reynolds said late this morning. “They’re telling Americans and Iowans if you get a vaccine you don’t have to wear a mask and then two weeks alter they change the message on that.”

The governor signed a bill into law in May that forbids Iowa schools from imposing mask mandates on students and staff and Reynolds said she’s concerned this new policy will lead to a federal mask mandate for schools.

According to the CDC, 47 Iowa counties have a substantial spread of Covid.

“We’re telling people to get vaccinated, first and foremost,” Reynolds said. “I’ve been very clear about that. That is the best defense to Covid.”

According to the governor, 95% of Iowans who are 65 or older have been vaccinated and 61% of all Iowa adults have had either one dose of the Johnson and Johnson vaccine or both doses of the Pfizer or Moderna vaccines. Reynolds also pointed to reports indicating nearly all of those who are currently hospitalized with Covid nationwide have not been vaccinated.

“I don’t feel that we should punish everybody because some have made the decision not to and I think we’re doing a very good job of continuing to make the vaccines available,” Reynolds said. “They’ll be available at the Iowa State Fair.”

The 2020 Iowa State Fair was canceled due to the pandemic, but hundreds of thousands are expected to make the trek to the state fairgrounds in Des Moines for this year’s fair, which is set to begin on August 12.