Weather Alert
A WINTER WEATHER ADVISORY is in effect until 6:00 AM CST Sunday for the entire listening area.
Local News 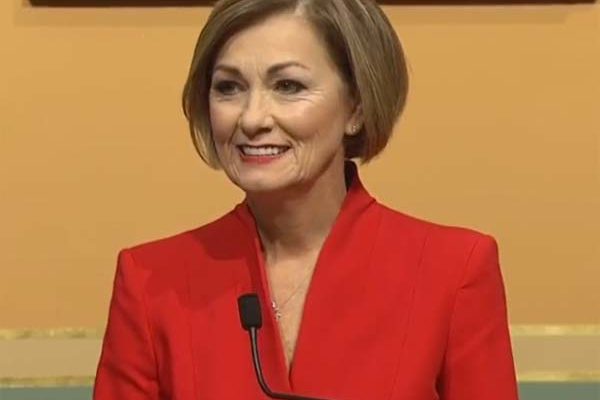 Reynolds criticized schools — mainly in Iowa’s urban areas — that failed to reopen all day, Monday through Friday, this fall. She’s asking legislators to no longer allow urban schools to deny “open enrollment” transfers to neighboring districts and the governor is calling for “education savings accounts” that would give parents state money to cover private school tuition.

“If there’s one thing the pandemic has taught us about education, it is that our parents need choice and it’s not just in person versus virtual,” Reynolds said. “Sometimes, it’s about which school to attend altogether.”

Republican lawmakers cheered the governor’s education agenda. House Democratic Leader Todd Prichard of Charles City said the governor is taking an “adversarial” approach toward public schools and teachers, who are on the front lines of the pandemic.

“We would love to have 100% in-person learning. We know that is the preferred method, but we need to make sure that it’s be done safely,” Prichard said, “so I think instead of dictating by fiat to these schools across the state, ‘This is how you’re going to do it,’ let’s support them. Let’s support their plans.”

“I don’t think we can have it both ways where we can put more burdens on public schools, but take away funding,” Prichard said. “That’s really concerning.”

Reynolds spoke for more than 41 minutes last night and offered a long list of priorities, including making child care and housing more affordable — and more available. Reynolds also called for spending $150 million in each of the next three years to boost broadband.

“As we’ve seen during the pandemic, high speed internet is as vital to our communities as running water and electricity,” Reynolds said. “If they don’t have it, they can’t grow.”

Iowa has the second-slowest broadband speed in the country, according to the governor, and she said it’s “rarely” even available in a third of the state.

“Let’s plant a stake in the ground and declare that every part of Iowa will have affordable, high-speed broadband by 2025 and we’ll get there by committing $450 million over that time period, which will leverage millions more in private investment,” Reynolds said, “giving Iowa the biggest buildout of high-speed internet in the country.”

Reynolds used a portion of her speech to introduce Davenport police officers who were ambushed last summer and the officers were applauded by lawmakers. Reynolds then called for legislation to both increase penalties for rioting or attacking police and to ban racial profiling.

“No actions should ever be taken based on the color of someone’s skin,” Reynolds said, to applause.

Senate Democratic Leader Zach Wahls of Coralville said lawmakers and the governor took a first step last June by passing a law banning the rehiring of officers fired for misconduct.

“Figuring out ways to take that next step on justice reform, while continuing to support our men and women in uniform in our law enforcement agencies is something that we should obviously be taking a look at doing,” Wahls said.

House Speaker Pat Grassley, a Republican from New Hartford, told reporters legislators have to dig into the details, but he praised the governor’s overall agenda.

“The governor laid out a lot of what I would call aggressive, forward-thinking proposals,” Grassley said.

Senate Republican Leader Jack Whitver says the governor presented a “positive, optimistic message.” As is common in a “Condition of the State” speech, Reynolds reviewed the past year, which in the case of 2020 included a devastating derecho and a pandemic, and she praised citizens for going “beyond Iowa nice” to help neighbors navigate tough times.

“That’s how I know that the condition of our state is strong because you are strong,” she said, ” stronger than you ever imagined.”