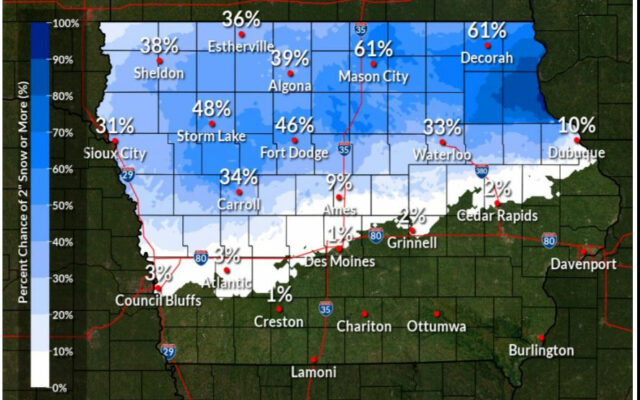 JOHNSTON — Forecasters say another storm system is expected to reach the state later this week that could bring snow across Iowa’s northern half and rain to the south.

Meteorologist Cory Martin, at the National Weather Service, says the divider line between snow and rain runs from Council Bluffs to Des Moines to Cedar Rapids to Dubuque, but just a few degrees shift in the temperature could make all the difference.

“Temperatures are going to be warm enough to support actually a fair share of rain probably for a good chunk of the area as the storm system moves in through the day on Thursday,” Martin says. “If we’re looking for any snow, it may be confined to far northern Iowa, whereas further south, right now, we’re looking at warm enough for some rain to fall.”

Once the sun sets on Thursday night, Martin says those conditions could change — or not — as the system is still developing.  “Thursday night into Friday morning, temperatures may cool enough to allow that rain-snow line to sink further south and into central Iowa,” Martin says, “so, still quite a bit of uncertainty there and just how far south we’re going to see snow, just because we’re talking the difference of just a degree or two.”

Wide sections of north-central and northeast Iowa may see two or more inches of snow, which could make driving hazardous from Mason City to Decorah. “It’s certainly possible up there that we’re going to see slick and snow-covered roads that may impact your travel especially as we get into Thursday night,” Martin says. “Once the sun goes down, temperatures cool a little bit more, so that’s definitely something that we’ll be monitoring.”

Keep up with the developing forecast at weather.gov.