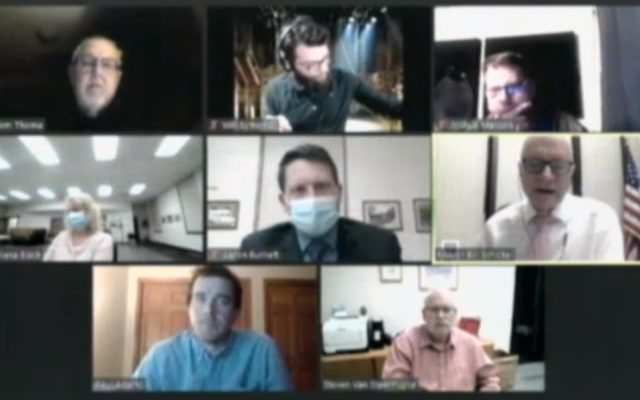 MASON CITY — The City Council in Mason City last night approved the second of three readings of an ordinance changing regulations on the way electronic signs are used by businesses and organizations. The proposed changes would require new electronic signs have brightness controls that would dim the signs after dark as well as reduce the amount of animation used on message displays.

The council at their October 6th meeting approved the first reading of the ordinance but asked staff to respond to concerns expressed by a local sign contractor who objected to the proposal. Director of Development Services Steven Van Steenhuyse says signs currently in place would be grandfathered in. “Any existing electronic message center signs would no be required to comply with these new requirements if they are adopted.” Mayor Bill Schickel asked existing as of when. “As of now, before the ordinance becomes effective. Obviously we’d have another reading and then it has to be published in the newspaper of record before it becomes effective.”

Three councilmen expressed concern about the proposed changes but were unsuccessful in getting the electronic sign proposals removed from the full ordinance that included other so-called “housekeeping” changes recommended by the city’s Planning and Zoning Commission to clean up portions of the city’s zoning ordinance. Joshua Masson raised objections to the changes for the second straight meeting.  “ I think that if we want to be friendly to business, I think that we you know, sometimes we can get overly burdensome on things like this.”

Councilman John Jaszewski says the proposed changes regarding electronic signs aren’t needed a this time.   “This seems to me like a solution going looking for a problem. I don’t think we have a problem either with distracted driving or some of the other things that have come up. Talking with the folks around from the community, this I think is just a bad idea. I’m going to have to vote against this when it comes up because  I just don’t think this really warrants our attention at this point , it just doesn’t seem like it’s a problem that needs solving.”

Councilman Paul Adams objected to pulling out the language regarding signs at this point. “This is second reading, so I don’t support an amendment right now, we have one more reading before it’s final. It would allow an initial two weeks to get further comments, questions from the public as well as we can still make the same changes on third and final reading if we still wanted to. Frankly myself, I’ve only gotten two letters objecting to this, and both parties that sent the letter, one was a dental office in town and one gentleman wrote on behalf of his church, already had signs, so they would not be impacted.

A motion to amend the full ordinance and pull out the section dealing with electronic signs failed on a 3-2 vote with four votes needed to approve. Councilman John Lee was absent from last night’s meeting.

The ordinance in total passed on second reading 4-1, with Masson being the lone objector. The council will likely take up the third and final reading of the ordinance at their November 3rd meeting.