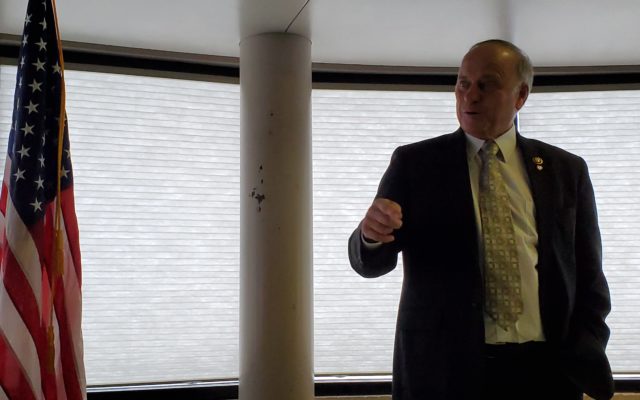 CLEAR LAKE — North-central Iowa congressman Steve King was asked to address the topic of abortion during a town hall meeting in Clear Lake on Wednesday afternoon.

Back in August during his Cerro Gordo County town hall meeting held in Rockwell, King fielded a question about whether an abortion should be allowed for a 10-year-old girl who had been raped by a family member and became pregnant.  At the time, he said he had never heard of a case that extreme and that he’d rather deliberate and answer the question at a later time.

King was asked on Wednesday if he now had an answer to the question.  “What I said is that this is a specific case that the people in the neighborhood know, they know who you are talking about. When we deal with case work, we keep that very confidential, because otherwise we can’t get to the facts and truth.  This is a topic that if I’m going to discuss it, I’d like to actually discuss it with the people that are actually the individuals, and I don’t want to say anything here or in front of the press that’s going to put any more stress on anyone and put them in a position like that. I understand you have a lot of passion for this.”

King was hesitant about taking a stance where there would be certain exceptions where he’d support allowing abortions.  “I believe that we are all created in God’s image and that our life begins at the instant of fertilization, I used to say the moment of conception, but now we have invitro fertilization. That life is precious and unique from that point forward. If we focus on these things that are exceptions, we end up widening exceptions.”

King says he wouldn’t as a single member of the US House want to decide if there should be certain exceptions where abotions should be allowed, including to save the life of the mother.   “When it gets to the life of the mother, r that’s not a decision I want to make. Let’s not address that. Let’s see if there is a requirement someplace down the line that it needs to be a subject matter. That’s way too tough a decision for a legislator or legislature to make. I don’t want to touch that one right now because there are very, very few cases.”

King was criticized for comments made prior to his visit to Cerro Gordo County in August, saying there should be no exceptions in cases of rape or incest. About 30 people attended Wednesday’s town hall meeting.