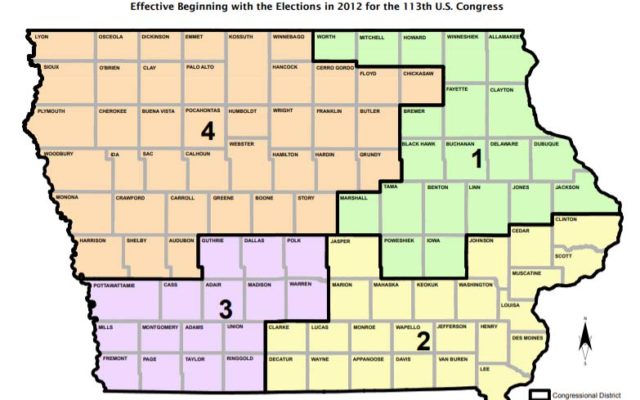 DES MOINES — The process of drawing new maps for Iowa’s congressional and legislative districts is underway.

The U.S. Census Bureau released those numbers yesterday. Jean Lloyd-Jones was president of the Iowa League of Women Voters when the group was deciding whether to join a lawsuit that challenged the maps drawn back in 1971.

“At the end of the call, I took roll and it was tied, so I cast the deciding vote and the next week we walked up there to the state capitol and filed the petition and let the chips fall where they may,” Lloyd-Jones said, “and the chips fell very well for us.”

The Iowa Supreme Court overturned the 1971 redistricting plan the Republican-controlled legislature developed. Lloyd-Jones said the testimony of Betty Kitzman of Ames, a League of Women Voters lobbyist, was critical to the case.

“At one point she was being queried by the opposing attorney, the defender of the plan, and he said: ‘Mrs. Kitzman, don’t you think you should have had some Republicans on your committee?’ and she smiled and said: ‘Sir, I am a Republican.’ And he looked aghast and said: ‘But you’re an impartial Republican,’” Lloyd-Jones said.

Lloyd-Jones made her comments during a 2018 forum about Iowa’s redistricting process that was broadcast on C-SPAN. The Iowa Supreme Court tossed out the plan approved by the 1971 legislature and the justices consulted with an attorney in the Legislative Services Bureau to draw up the congressional and legislative district maps used in that decade.