Iowa Poison Control Center warns against use of Ivermectin 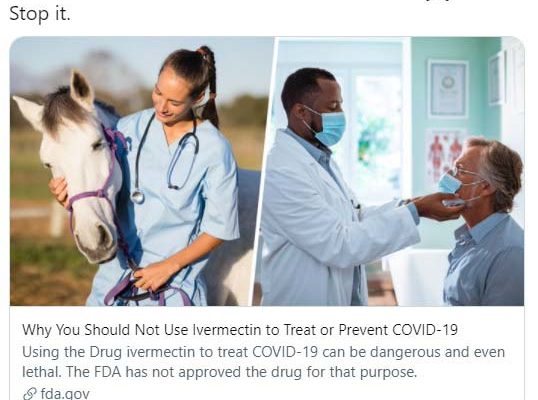 SIOUX CITY — Some Iowans are ignoring warnings and taking a powerful medication designed for deworming cattle and horses in hopes of preventing or treating COVID-19.

Tammy Noble, a registered nurse, and spokeswoman for the Iowa Poison Control Center, says there’s suddenly a lot of buzz over Ivermectin and the Sioux City-based facility has taken calls from people who’ve ingested it on purpose and by mistake.

“We’ve had a combination of both, of people that are intentionally taking it and people that are not, that have an accidental exposure to it,” Noble says, “so we’ve had both, but it’s less than a handful.”

Before taking any drug to treat or prevent an ailment, Noble says it’s important to consult a physician first, especially before taking anything unapproved. “The FDA has not approved Ivermectin for use in treating or preventing COVID-19 in humans,” Noble says. “At this point, there’s not really good evidence or good proof that Ivermectin is beneficial.”

The poison center in Georgia reports a 700% increase in calls about Ivermectin in recent weeks. The drug can be used in proper doses to treat skin conditions in humans and pharmacies nationwide had reported dispensing about 3,600 prescriptions per week. In recent days, however, Ivermectin prescriptions have jumped to 88,000 per week.

“If you’re considering using the animal product on yourself, we do not recommend that,” Noble says. “The veterinary formulations are typically for use in large animals. They are highly concentrated and if a human should take that, that could easily lead to an overdose.”

Taking inappropriate doses of the drug can lead to seizures, coma, and death, Noble says. The Iowa Poison Control Center is available around the clock at 800-222-1222.