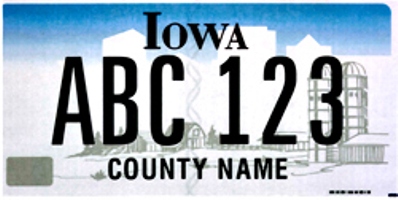 DES MOINES — The debate over requiring an Iowa license plate on the front and rear of vehicles has been revived in the 2019 legislature.

The House voted last week to let antique or classic vehicles that are least 25 years old to go without a front license plate. The House plan also directs the Iowa DOT and Department of Public Safety to study the issue.

“The purpose of this study is to address law enforcement’s concerns for public safety as well as to address the ever-increasing amount of life safety technology being placed in the front bumper by auto manufacturers,” said Representative Brian Lohse of Bondurant.

“Now I’m perfectly willing to take a look at what recommendations are made, but I don’t think we can minimize the public safety importance of having proper identification at the front of the car,” McKean said. “It’s made a big difference in many cases for public safety concerns.”

The bill passed the House on a 96-1 vote Wednesday. However, 34 members of the Iowa Senate voted for a different approach to this issue two weeks ago.. The Senate plan would forbid police from pulling a vehicle over solely because it lacks a front license plate. The Senate proposal also would let auto owners skip putting a license plate on the front of the vehicle if it requires drilling holes or using glue to get the plate on the front bumper.

Iowa is among the 31 states that require plates on the front and rear of vehicles. Most sports cars and high-priced, luxury vehicles don’t have a spot for a front plate.