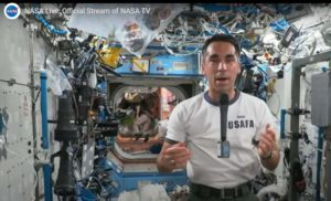 Chari, who graduated from the academy in 1999, was asked via NASA-TV about how his mission on the orbiting station is related to future missions to Mars.

“We’re increasing our sample size of people who’ve been here longer than six months, up in space,” Chari says. “The reason we’re doing that is we want to see — is the progression of human change linear, with months to years as we look at Mars, or is there a cliff? Does something happen at a year? Does something happen at 15 months? We’re trying to solve that problem. As we look at a Mars mission, we need to understand that.”

Beaconsfield native Peggy Whitson spent a record 665 days in space during three separate missions. Chari is in his second month of what’s scheduled to be a six-month stay on the space station. With current technology, it would take about six months for astronauts to fly to Mars. Chari appealed to the academy cadets who are studying rocketry and astrophysics to seek out new ways to propel our spacecraft.

“If we can get there faster, that will solve the problem. Most of our problems, whether it’s radiation, human psychology, water, consumables, getting there and back and living there, it’s all because it takes so long to get there,” Chari says. “If we could have a quantum leap in propulsion technology, whether it’s electric, whether it’s nuclear propulsion — getting to accept that politically and socially — I think that would solve a lot of our problems.”

While astronauts endure many months of training for all types of tasks, Chari says there’s one aspect about being in space for which no amount of preparation could ready you.

“The thing that you can’t ever completely experience is the weightlessness and then actually how your brain is going to respond to that,” he says. “Everyone responds a little differently and you can’t quite train for that on the ground. For me, I think that was the most — not unexpected — but the most surprising thing, but what’s most amazing is how quickly your brain does adapt to it and it eventually becomes something you just naturally do, just like breathing.”

Chari is a 44-year-old Air Force colonel and this is his first mission in space, though he’s flown a multitude of aircraft, including the F-15E Strike Eagles during combat over Iraq. He’s only the 8th Iowan to reach space. His wife, Peggy, is also a Cedar Falls native and they have three children.