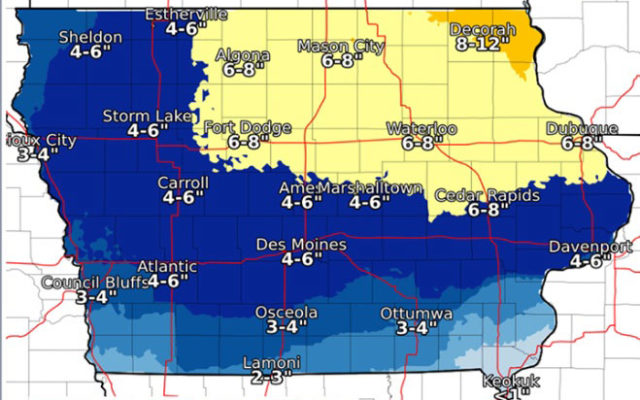 MASON CITY — Iowans have just shoveled out from the weekend snowstorm and now another one is heading for us which promises to drop significantly more snow.

It’s already snowing in parts of southern and central Iowa as the system moves northward. Meteorologist Kenny Podrazik, at the National Weather Service in metro Des Moines, says temperatures are falling as the front approaches. “When you see this precipitation beginning, there could be areas of freezing drizzle before it switches over to all snow,” Podrazik says. “That’s going to add to the potential for some slick roads during the afternoon.”

The least amounts of snow are expected to fall along the southern two tiers of Iowa counties with perhaps two to four inches. In cities from Des Moines to Iowa City/Cedar Rapids to Davenport, the commute this afternoon and evening could be challenging due to ice and snow. “Here in the metro, we’re looking at a good four to six inches, to Ames four to six inches, with some locally-higher amounts, of course,” Podrazik says. “Then, further north, we’re looking at a good six to eight inches along Highway 20 northward.”

Far northeast Iowa could get very heavy snow, between eight inches and a foot. A Winter Storm Warning is posted for a wide section of central, northern and eastern Iowa. “Snowfall is going to taper off during the morning hours Tuesday and that’s when the winds will start to increase,” Podrazik says. “We’re going to see wind gusts out of the northwest at 30 to 35-miles per hour, so that’s going to be blowing this snow around, causing some significant drifts and making travel pretty difficult.”

Temperatures will fall behind the storm system, with lows in single digits by Tuesday night. Forecasters say there’s a chance for more snow Thursday into Friday.