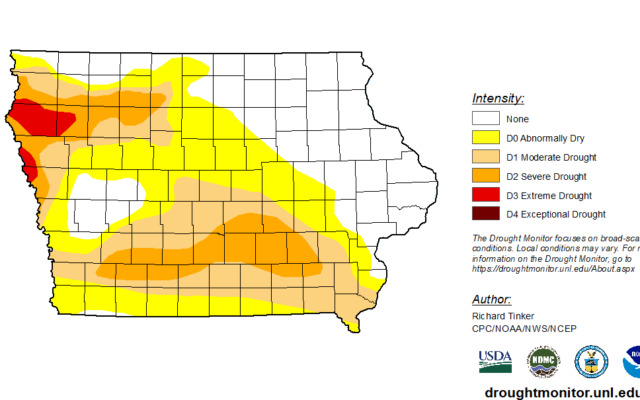 AMES — Despite widespread rainfall earlier this week, drought conditions are worsening across Iowa, according to the new map out today from the U-S Drought Monitor.

Iowa State University Extension field agronomist Rebecca Vittetoe says the new red spots on the map are particularly troubling. “It just got updated again this morning based off of rainfall as of Tuesday morning of this week,” Vittetoe says, “so, not necessarily major changes on the Drought Monitor but parts of western Iowa, there’s a few more areas that are in the D-3 or that extreme drought compared to last week.”

Extreme drought is now shown in five western counties: Cherokee, Monona, Plymouth, Sioux and Woodbury, while statewide, 67 counties are now in some form of drought, up from 64 counties last week.

Vittetoe is based in southeast Iowa’s Washington County, which is listed as both abnormally dry and in moderate drought, and she’s encouraged by crop conditions as harvest season nears.  “It’s amazing what the plant breeders have been able to do to help crops better withstand drought,” Vittetoe says. “I look at some fields that have had less than five inches of rainfall this growing season and I’m impressed with how well they look, considering the little rainfall that we have had.”

She says Iowa’s two biggest crops are suffering fairly equally in the drought.  “On the corn side, that pollination and grain fill is a really critical period when we don’t want to be having a lot of drought stress. We want to have plenty of moisture, cooler temperatures, to really help with pollination and with grain fill,” Vittetoe says. “On the soybean side, if we’re hot and dry in July, when that corn’s pollinating, I’m not as concerned then as when we get into August and we’re trying to work on putting on pods, filling pods.”

Vittetoe will be hosting a statewide virtual meeting next on the drought from the fall harvest perspective. For details, visit: https://www.aep.iastate.edu/drought/view