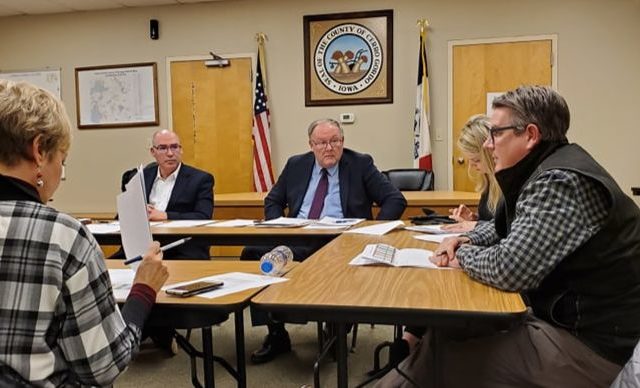 MASON CITY — The Cerro Gordo County Compensation Board Tuesday afternoon approved a recommendation that the county’s elected officials should get a two-and-three quarters percent pay raise in the next fiscal year starting in July. It would be equal to what the board recommended last year and slightly higher than the two percent recommendation the year before.

Board member Tim LaPointe recommended a five-percent increase, but several board members, including board chair Jim Finstad, disagreed that the pay raises should not go over the average percentage raise that the county’s union and non-union employees will receive in the next fiscal year.  LaPointe thought 2.75% was too low last year and said he wouldn’t approve anything less than a 2.8% increase “to show them we are moving in the right direction”. Finstad replied, “I don’t like giving them a raise that’s higher than their employees, so I couldn’t support that.”

Board member Mary Ingham agrees with Finstad in not approving raises for elected officials higher than regular employees, using the Sheriff’s Department as an example.  She says, “Let’s say the recommendation of 5%, but then I’m reading in the packet that we’re looking at to 2.7% and 2.6% for union employees. What does that do to morale? Everyone knows the highest paid person at the sheriff’s office is the sheriff. If he’s getting a 5% raise based on his highest paid salary and his deputies are getting 2.7%?” Finstad says, “I agree with you, I have trouble giving the sheriff a larger raise than the deputies. I agree with that.”

The board approved the two-and-three-quarters percent recommendation on a six-to-one vote, with LaPointe being the lone no. It’s now up to the County Board of Supervisors to accept the Compensation Board’s recommendations or approve a lower percentage of a raise. The supervisors are not allowed by law to approve anything higher than the board’s recommendation, but they can freeze or cut their own pay.

Supervisors chairman Chris Watts attended Tuesday’s meeting and tells KGLO News that he will recommend that their pay once again be frozen. The supervisors for this fiscal year voted down a pay raise for themselves, with the Compensation Board the previous year recommending a supervisors pay freeze after they turned down a pay raise the year before.