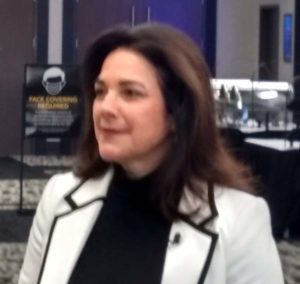 The survey by Spectrum Gaming says it appears that Cedar Rapids is well served by casinos in Waterloo and Riverside and a Cedar Rapids casino could significantly impact those two properties.

The study by the Innovation Group shows existing casinos would lose 30% of their revenue from a new Cedar Rapids casino.  Innovation spokesman Thom Litt says looking across the country it has been rare to see anything more than a 30% impact.

That impact would be $61 million on the Waterloo and Riverside casinos — but the survey says overall revenue in Iowa is estimated to increase by $51 million with the addition of a Cedar Rapids casino to the market.

Newly-elected Cedar Rapids Mayor Tiffany O’Donnell says that is positive. “I’m very encouraged. They’re two different studies and I consider the Innovation Group study to be the one that I am going to lean on the most —  knowing that it is proven to be, this a group that’s proven to be within one or two points in past studies like this,” according to O’Donnell.

Cedar Rapids was denied a casino license in 2014 and 2017 over concerns it would cannibalize existing casinos.  O’Donnell believes that is going to change with the latest studies.

“The effects will be minimal, and certainly the effects on existing casinos less than they’ve ever been before. If not a casino in Cedar Rapids now, I’m not sure when it would be,” she says.

Elite Casino Resorts which owns the Riverside Casino, issued a statement saying the new studies confirm that a Cedar Rapids casino would get a majority of its revenue from existing casinos — and the Cedar Rapids market is well served by the Riverside and Waterloo casinos.