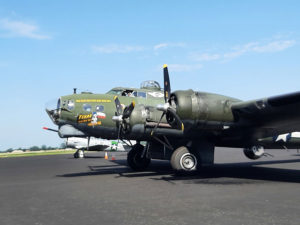 One of the planes was a B-17 bomber known as “Texas Raiders” that flew into Sioux City in July for the 80th anniversary of Sioux Gateway Airport. Larry Finley, director of Sioux City’s Mid America Museum of Aviation and Transportation, says the two pilots and the bomber’s crew members were all well trained.

Finley says, “They’re all very experienced pilots and they are pilots for the Commemorative Air Force but they’re also pilots generally in commercial and military aviation, so they are a very experienced group.” The restored World War Two-era bomber collided with a P-63 Kingcobra, a vintage fighter plane.

Videos shot by spectators at the event show the Kingcobra fly into the bomber, causing them to immediately crash to the ground and explode. The National Transportation Safety Board had taken control of the crash scene and Finley says the investigation will be slow and methodical.

“That can take a month or two for preliminary results from the NTSB, and then their final report may not be out for one to two years as far as the actual cause of the accident,” Finley says. “They have to go back and look at whatever parts are left that they can evaluate to see if it was a mechanical failure, or was it a human error.”

Finley says Texas Raiders was one of just ten B-17s still in existence and just a couple of them were air-worthy. “There were only three of the ten B-17s that were still flying. It was one of three that had returned to the air post-COVID,” he says. “They had pulled everything off from these air shows for almost two years.”

In July, the Texas Raiders flew for a week in Sioux City, with over a hundred people booking flights on the vintage aircraft.