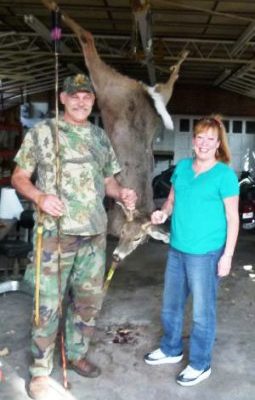 Missouri hunter who took a deer with an atlat

DES MOINES — Ancient, unusual and a tongue-twister — just a few words lawmakers are using to describe a prehistoric weapon that’s made its way onto the pages of proposed legislation at the state capitol.

A three-member panel of senators took up a bill this week that would let people use what’s essentially a spear-thrower to hunt deer in Iowa. The name of this weapon is a little weird. Pronouncing it properly is a challenge.

“No, we don’t seem to have an agreement on that,” Senator Tom Shipley said.

Shipley admitted there was a good bit of laughter as senators in a subcommittee took at shot at it.

“Everybody seems to know what we’re talking about when we mumble through it,” Shipley added.

It’s called an atlatl. The preferred pronunciation from hunters who’ve posted videos about the weapon online seems to be at-LAT-ul. Archaeologists believe the atlatl was first used in North America about 13,000 years ago. The bow-and-arrow began replacing the atlatl for hunting about 3,000 years ago. Senator Shipley, who is from Corning, said some hunters from his area asked if hunting deer in Iowa with an atlatl could be legalized.

“I looked into it and realized that two of our neighboring states close to me — Nebraska and Missouri — allow it,” Shipley said.

Alaska and Alabama do, too, so Shipley’s sponsoring a bill to do the same in Iowa.

“These things have been used for thousands of years to hunt with, so it’s probably the oldest form out there,” Shipley said.

According to the World Atlatl Association, atlatls are one of humankind’s first mechanical inventions. The atlatl is “essentially a stick with a handle on one end.” There’s a socket at the other. The spear is placed in that socket and “the flipping motion of the atlatl propels the spear much faster and farther than it could be thrown by hand alone.”

As for whether it’s an effective hunting weapon, Shipley offers this opinion: “It’s just like everything else. It depends on who’s on the other end of it.”

(Photo from the Missouri  Department of Conservation)