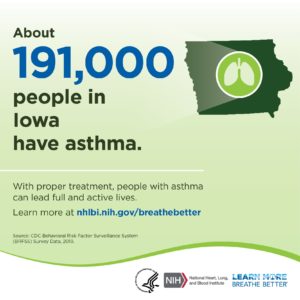 DES MOINES — About one in ten Iowans has asthma, a rate that’s a little higher than in most other states.

Dr. Michelle Freemer, director of the Asthma Program in the Division of Lung Diseases at the National Institutes of Health, says asthma is a chronic airway disease that’s characterized by occasional worsening of inflammation which makes it harder to breathe.

“Everyone who has asthma is going to have some days when their breathing is easier or harder than another, but what we want each person with asthma to know is that we have tools to offer them so that they can live, work, learn and play as much as they want,” Freemer says. “That is, somebody with asthma should be able to do everything that someone who doesn’t have asthma can do.”

It’s important to learn about advances in preventing, understanding, treating and managing asthma, as Freemer notes, it’s one of the country’s most common and most expensive diseases.

“We think that each person who has asthma deserves to have an asthma action plan that works for them,” Freemer says. “What that means is that with help from their health care provider, people with asthma know what to do to manage their asthma in different situations.”

Anyone at any age can develop asthma, but research has found that boys tend to have asthma more often than girls, while women are more likely to have asthma than men.

While there’s no cure for asthma, it is manageable. During the pandemic, asthma attacks dropped significantly in a large study group of children and teens.

Researchers believe a better understanding of the factors that contributed to these improved outcomes could lead to better asthma control. For more information, visit www.nhlbi.nih.gov/breathebetter.