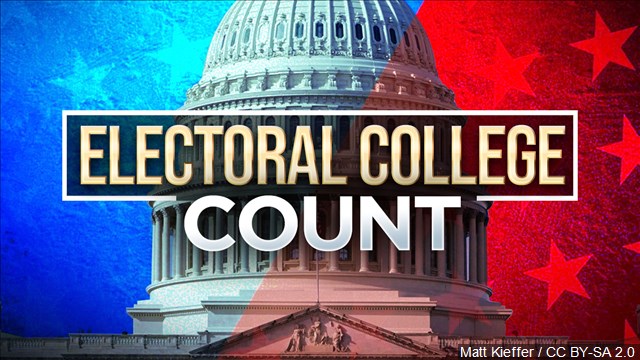 WASHINGTON — Iowa’s congressional delegation was unanimous in its rejection of attempts to delay confirmation of Joe Biden’s Electoral College win.

Democrat Cindy Axne of West Des Moines and Republicans Mariannette Miller-Meeks of Ottumwa and Ashley Hinson of Marion announced in advance that they would accept the Electoral College results when they were presented in the U.S. House. Republican Randy Feenstra of Hull — the other member of Iowa’s delegation in the House — issued a written statement tonight. Feenstra said he was following the Constitution by ensuring the Electoral College votes were confirmed.

Republicans Chuck Grassley and Joni Ernst both issued written statements after voting in the Senate. Grassley said election disputes are to be settled in the courts. Grassley noted none of the 78 lawsuits filed on President Trump’s behalf had changed any state’s election results – and Grassley said politicians in Washington shouldn’t second guess the courts once they’ve ruled. Ernst said objecting to the Electoral College count will not change the outcome and Ernst said the “reprehensible violence” in the U.S. Capitol won’t change it, either.

You may read their full statements below.

Feenstra, Grassley and Ernst all expressed concern about the conduct of elections. Feenstra called for hearings in the House to investigate allegations of ballot fraud. Ernst said she supports creation of a bipartisan commission to investigate the administration of this year’s election. And Grassley said it’s important for state legislatures to take steps to restore trust in the outcome of elections.

Earlier on Twitter, former Iowa Congressman Jim Nussle, the 2006 Iowa GOP nominee for governor, announced he could no longer stay in the Republican Party. Nussle said a “final line” had been crossed Wednesday and he is “outraged and devastated” by the actions of too many Republicans.

WASHINGTON — Rep. Randy Feenstra (R-IA04) released the following statement regarding today’s attack on the Capitol and the pending vote to certify the Electoral College results:

“Today is a very sad day in our nation’s history. While every American has a First Amendment right to free speech, which includes the right to peacefully protest, violence is never the answer. A woman died during the events that unfolded. Our beautiful Capitol — a symbol of our Republic — was desecrated in front of the world.

“Frustrations over the results of the election are understandable, but resorting to violence and anarchy is completely unacceptable.

“When I was sworn into office on Sunday, with my hand on our family’s Bible, I took an oath to uphold the Constitution of the United States. Today, that is what I’ll do. The Twelfth Amendment to the Constitution states, ‘The person having the greatest Number of [Electoral College] votes for President, shall be the President, if such number be a majority of the whole number of Electors appointed.’ To date, no state has sent a new slate of electors — even though they have the constitutional power to do so. Therefore, the results of the Electoral College will stand.

“I will always be a strong advocate and supporter of efforts to uphold the security and trust Americans have in our election system, such as implementing strict voter ID laws like we have here in Iowa. That is why I signed on to a letter with my freshman colleagues urging House leadership to take action and support the integrity of our election process.

“Free, fair, and legal elections are the cornerstone of our Republic, and even one case of fraud is one case too many. Congress must immediately hold hearings on election integrity so Iowans and all Americans can once again have faith in our elections.

“America can, and must, be better than what we witnessed today. I pray that she will be.”

“The violence and disruption we saw today must not be allowed to disrupt or intimidate us from performing our constitutional duty as lawmakers. I took an oath of office to support and defend the Constitution, even in the face of threats. That is the lens through which I view today’s process.

“The Constitution and our laws give Congress few options and limited authorities when it comes to certifying presidential election results. Congress has no role in conducting elections or adjudicating election disputes, only receiving and formally counting the electoral votes cast in each state. This constitutional process allows the states to determine under their own laws and legal systems how their electoral votes are allocated. And let’s be clear about what the stakes are here. If an objection to a state’s electoral certification is sustained, the state’s electoral votes are thrown out, not reallocated to a different candidate. So anyone voting to object to any state’s certification of electoral votes is voting to disenfranchise an entire state.

“The right place to resolve electoral disputes is in the courts. As we saw in Iowa’s Second District House race, there is an established process to review election disputes, and that process should not involve Congress overriding independent judicial decisions. Our independent legal system is tasked with expeditiously evaluating election disputes. To date, 78 lawsuits have been filed alleging election irregularities in various states. They have had their day in court but none of them was successful in changing election results in any state. Politicians in Washington should not second guess the courts once they have ruled, and we cannot and should not consider allegations not formally presented to a court of law. The question before Congress is not whether there are legitimate complaints about how elections were conducted; only whether to accept or reject entirely the electoral votes cast by a state. I could not in good conscience vote to disenfranchise an entire state.

“That said, it’s important to take seriously concerns about election irregularities to restore faith in our election system. Democrats are wrong to reject this discussion out of hand. They attempted to object to certifying the last three Republican presidential elections on the grounds of alleged election irregularities. I opposed those efforts to reject the state certified vote counts each time. Our Constitution sets up a federal system, of which the Electoral College is a key component, ensuring that states like Iowa have a voice. I swore to uphold the Constitution, therefore I cannot support any effort to undermine the constitutional role of states in elections. I share the frustration of many Americans about the election outcome, and I’m also concerned about claims of irregularities that were exacerbated by states changing their rules at the eleventh hour. Going forward, it’s important that state legislatures closely scrutinize the events of this election and take necessary steps to promote independence, transparency and trust in future elections.”

“In the military, I proudly served alongside some of the brightest and bravest men and women to defend America—her freedoms and her values. We fought to uphold the right to peaceful protest. Sadly, what I witnessed today in the U.S. Capitol was a complete betrayal of those sacred ideals. What started as a protest turned into anarchy. Individuals who resorted to this violence must be punished to the fullest extent of the law.

“America – we cannot stand for this.

“For years, we have been able to disagree and debate tough issues and always strive to be a more perfect union. We have had a peaceful transfer of power from one administration to another throughout the course of our history, and it’s paramount we do that once again.

“There is no doubt we should ferret out any illegal votes and learn from any irregularities during the 2020 presidential election. This is one reason why I am supporting Senator Tim Scott’s (R-SC) effort to establish a bipartisan commission to study the integrity and administration of the election.

“When looking at the election for Iowa’s second Congressional district, I have been consistently clear that Mariannette Miller-Meeks won. Though the margin was close, Iowans spoke and elected Congresswoman Miller-Meeks, and a bipartisan panel in Iowa certified the results. I view the presidential election results the same way. As a senator, my job is not to overturn the will of voters and choose winners of elections—just like it’s not the House of Representatives’ to handpick who serves as Iowa’s second district congresswoman.

“We’ve heard time and again from Democrats who would like nothing more than to abolish the Electoral College and federalize our election system. What would that do? Silence Iowans’ voices and votes. I won’t allow that to happen.

“Iowans should rest assured that I will continue fighting for our shared values and priorities, and that I will hold the new administration accountable. I truly believe America is the greatest nation on the planet, and she must continue to be a beacon of freedom and hope for everyone around the globe,” said Senator Joni Ernst, the first female combat veteran elected to the Senate.