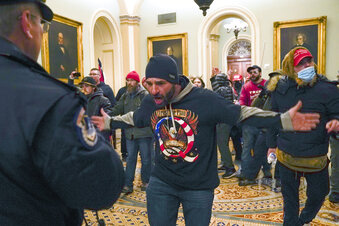 FILE - Trump supporters, including Doug Jensen, center, confront U.S. Capitol Police in the hallway outside of the Senate chamber, Jan. 6, 2021, at the Capitol in Washington. A trial is set to open for Jensen, who ran after a police officer retreating up a flight of stairs during a mob's attack on the U.S. Capitol, a harrowing encounter captured on video. Jensen, who wore a shirt promoting the QAnon conspiracy theory, told the FBI that he wanted to be a "poster boy" for the events that unfolded on Jan. 6, 2021. (AP Photo/Manuel Balce Ceneta, File)

WASHINGTON (AP) — A trial is underway for an Iowa man whose confrontation with police created some of the most memorable images from a mob’s attack on the U.S. Capitol.

A viral video recorded by a reporter’s cellphone showed Jensen running after a Capitol Police officer who was retreating from a crowd of rioters up a flight of stairs. Jensen was wearing a shirt bearing the letter “Q” to express his adherence to the QAnon conspiracy theory. His lawyer said QAnon influenced Jensen’s actions at the Capitol on Jan. 6, 2021.

More than 870 people have been charged with federal crimes for their conduct on Jan. 6. Approximately 400 of them have pleaded guilty. Juries have convicted eight Capitol riot defendants after trials. None of the defendants who had jury trials was acquitted of any charges.