“We are excited to have him part of the family,” said Schwab, who will begin his 13th season as coach of the Panthers in the 202-23 season.

Northern Iowa placed 20th at last season’s NCAA Division I national meet with 28.5 points. It was the sixth top 20 season for the Panthers since Schwab took over as head coach.

UNI placed fifth at the Big 12 Championships with 100 points with seven medalists, who qualified for the national tournament.

Minto and NIACC’s Jose Valdez (197) are NIACC’s first NCAA Division I wrestlers since Yoanse Mejias signed with Oklahoma after the 2015 season.

Minto, who is from Cape Coral, Fla., claimed his two NJCAA national titles in the 2021 and 2022 seasons.

Minto’s lone loss at NIACC came in the 2020 championship match when he dropped a 6-4 decision to Iowa Western’s Isaiah Crosby.

Minto’s brother Basil, who is head NIACC women’s wrestling and men’s assistant coach, wrestled for two seasons (2013-2015) at the University of Northern Iowa. Basil, who was a two-time all-American at NIACC, was sixth at the MAC Championships in his senior season for the Panthers and qualified for the NCAA tournament.

The Chicago Cubs and Cincinnati Reds will play the second major league game at the Field of Dreams site near Dyersville on Thursday night, but tonight, it’s two Iowa teams.

It will be the first-ever Minor League Baseball game on the famed field between the Quad Cities River Bandits and the Cedar Rapids Kernels. Matt Mullenbach  one of the Kernels’ pitchers, tells KCRG-TV that even though he’s from Urbandale and grew up in Iowa, it’ll be his first time to visit the movie site.

Mullenbach says, “Throughout my baseball career, one of the first questions I get is, ‘Have you been to the Field of Dreams,’ so being able to play on it is going to be pretty cool.” Mullenbach was reassigned to the Kernels in early July, which is the closest he’s played to home in a while. Before this, he was in Brooklyn, New York, so it’ll be a big change to see the green cornfield — in the outfield.

“It’s probably going to feel a little surreal, just watching the movie a bunch of times,” he says, “so when I get there, it will probably feel like a little bit of a dream.” Dyersville has a significant spot in the Mullenbach family’s history, as that’s where his parents met and where his dad, Dan, proposed to his mom.

Dan Mullenbach says Dyersville is a special place. “I played baseball at Buena Vista University in the late ’80s, graduated, and had a buddy that was from he Dyersville area and took a job in Chicago,” Matt’s father says. “My future wife was teaching in Iowa, so Dyersville is where we’d meet because I’d come back from Chicago on the weekends to play baseball.”

After more than 30 years of marriage, Dan and Barb Mullenbach will visit the Field of Dreams for the first time to watch their son play baseball. Just for tonight, both teams have changed their names to honor throwbacks in their respective cities — so it’ll actually be the Davenport Blue Sox versus the Cedar Rapids Bunnies. The team that’s now the Kernels was the Bunnies in the 1900s into the 1930s. The story goes that someone mis-heard Cedar Rapids as “See the rabbits,” which eventually morphed into the Bunnies mascot. 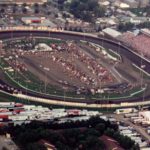 Sprint Car Racing’s biggest event begins Wednesday night with the first of two nights of qualifying at the Knoxville Nationals. Saturday night’s championship lineup will be determined by a point system that even includes time trials and heat races.

“And then we come around an run a feature for 200 points to win so a perfect score is 500 points”, said race director John McCoy. “The cream always rises to the top but it does give the middle sized teams a chance of doing well.”

More than 100 cars are entered. Saturday night’s feature winner will pocket 175 thousand dollars and the total purse will top one million dollars.

“That is why we get a hundred cars”, added McCoy. ” Everybody who comes out here to the middle of the country should have a chance to make a decent dollar.”