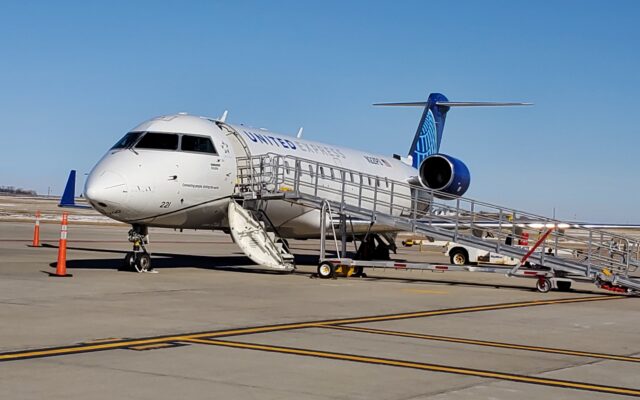 MASON CITY — A representative of SkyWest Airlines says the company is happy with the number of passengers using their United Airlines service from Mason City to Chicago since it started in March.

During a presentation to members of the Mason City Chamber of Commerce this morning, Gary Foss of the marketing firm ArkWest, which helped launch SkyWest’s service in Mason City, says the airport saw 1317 total round-trip passengers to and from Chicago in the month of May and that number is projected to keep going up.  “You can see the trajectory is the right one, that the community is supporting the service. SkyWest is happy, and we’re expecting this hopefully to reach the 2000 figure. You can see how that compares to what you had in the past, which was a good carrier with AirChoice One, but just the smaller planes of course. This is what you are looking at is commerce. These are people filling your hotels and your restaurants and coming to do business in Mason City, so this is a very, very important component.”

Foss says traffic in the post-pandemic period has recovered better for Mason City than the national average.  “You can see that you are 965% of where you were last year. Of course travel is coming back with a vengeance given all the pent up demand, and airlines are having a real hard time keeping up. You can see the average of the other 568 commercial airports in the country is that they are up 677%. You’re doing well on a relative basis and doing well relative to yourself in the past.”

SkyWest is in the fourth month of a three-year agreement with the Mason City Municipal Airport under the Essential Air Service program providing 12 round-trip flights per week between Mason City and Chicago’s O’Hare International Airport.