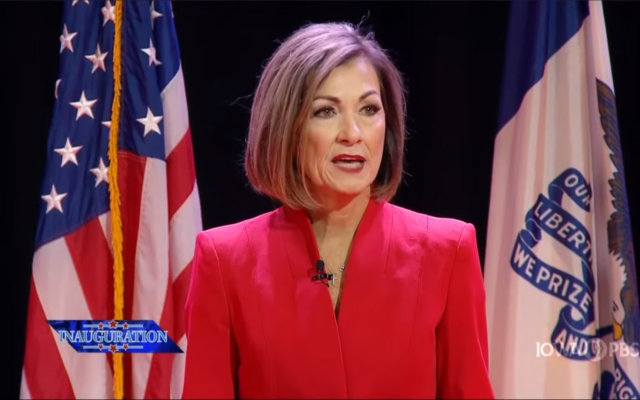 DES MOINES — Governor Kim Reynolds says state funding for small public schools in rural areas will remain stable if the legislature approves her plan to set up state-funded accounts for parents who send their kids to private schools.

Reynolds discussed details of her school choice bill during an interview with Radio Iowa. “I would say that we’re putting a significant amount of money into our kids and into education, both public and private as well with the new ESA language that we’re proposing,” Reynolds said Thursday.

Reynolds’ staff has estimated about $107 million of state funds would be deposited in Education Savings Accounts for low income parents enrolling children in a private school this fall. Reynolds has also recommended that legislators provide $190 million more to public K-12 schools in the next academic year.

Reynolds said she’s under no illusion she’ll change opponents’ minds about her plans. “I want somebody to tell me what is the magic number. What is the magic number that all of a sudden will make all of education wonderful? Is it 75% of the budget? Is it 65% of the budget? You know 57% of the state budget is going to education. Come on,” Reynolds said. “There are examples of states out there that are spending way less on education and getting better results.”

“Their funding will stay the same or increase with the proposal that we put forward,” Reynolds said.

This is the third and most expansive “school choice” plan Reynolds has presented to legislators. Last year, Reynolds met with rural school superintendents and principals as she tried to round up support — and votes in the House — for the concept.

“I just said: ‘Hey, I want to look you in the face and I just want you to know that it is critical that we have a strong public school system. It’s the foundation of our educational system. It’s the foundation of our economy and our society. I don’t have any illusion that I’m going to sit across from you and change your mind,’” Reynolds said. “‘But I do believe that parents also, regardless of whether make enough money or not, if their child is not thriving in the system that there is and we can provide some choices, we should do that.”

By 2025, all private school parents in Iowa, regardless of income, could get state money to cover private school expenses under the governor’s plan — an estimated $341 million in total. A private company would oversee those payments. “It will be a separate platform that we will be able to manage the system through,” she said when asked about preventing fraud.

“It will be automated. I think that’s the important thing to understand,” Reynolds said. “It’s not going to through the Department of Education. This will be a separate entity that will handle that, much like we do the 529.”

The state authorized so-called “529” College Savings Iowa Plans provide some tax advantages to parents saving for college expenses and the accounts are managed by Vanguard, an investment company.

On Thursday, Republicans on the Senate Appropriations Committee approved the governor’s school choice bill. The legislation is now eligible for debate next week in the House and Senate.