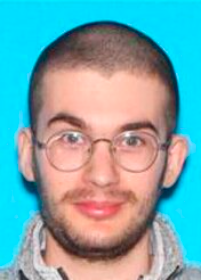 Photo provided by the Iowa Department of Public Safety, Anthony Orlando Sherwin is shown. Three people were killed in a shooting at the Maquoketa Caves State Park Campground in eastern Iowa Friday, July 22, 2022 and the suspected gunman is also dead, police said. Mike Krapfl, special agent in charge of the Iowa Division of Criminal Investigation, said officers searching the campground found the body of a Nebraska man who had died from a self-inflicted gunshot wound. Authorities identified him as 23-year-old Anthony Sherwin.(Iowa Department of Public Safety via AP)

MAQUOKETA — A published report now says the suspected gunman in the murders of a Cedar Falls couple and their six-year-old daughter last month used a so-called ghost gun.

The Des Moines Register quotes the parents of the 23-year-old from Nebraska as saying he ordered the parts for the untraceable weapon online and built it himself at home. The Register says the parents wrote in a letter to the paper that their son wanted the gun as protection for his family from a rising threat of violent crime.

Investigators say he used the gun to kill Tyler and Sarah Schmidt and their girl, Lula, in their tent at Maquoketa Caves State Park, and later turned the gun on himself.

No motive is known and there’s no known link between the alleged gunman and the Schmidts.