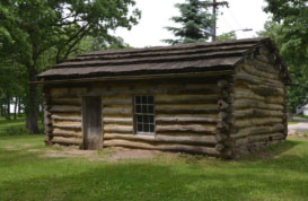 ARNOLDS PARK — An engineer hired to evaluate a historic site in Arnolds Park is recommending major repairs to the Abbie Gardner cabin.

It’s the site of what’s known as the Spirit Lake massacre of 1857. About three dozen Europeans were killed by members of the Dakota tribe who used the area for hunting. Thirteen-year-old Abbie Gardner was briefly taken hostage. Three decades later she bought her family’s cabin and gave tours.

Anita Bomgaars is with the Abbie Gardner Cabin Friends group that asked for the evaluation. “The good news was that structurally the cabin is in pretty good structural shape,” Bomgaars says. “We really don’t need to worry about immediate roof collapse, but the other flip side of it is it needs a lot of work.”

The cabin needs to have the shingles and boards on the roof replaced, corners of the structure need repairs and the engineer recommends that a handicapped accessible door be installed. Bomgaars says her group hopes the roof gets replaced before winter.

“We would like to say that would be our plan, but the cabin is owned by the State of Iowa and it’s part of the National Historic Register of landmark buildings in our country, so the onerous part it on them,” Bombaars says. “They need to get it done, but will provide, from our group, the impetus in a variety of ways to make sure that this occurs.”

The cabin was one of Iowa’s first tourist attractions and Gardner operated it herself until her death in 1921. Her son sold the property to the Iowa Conservation Commission in 1941.