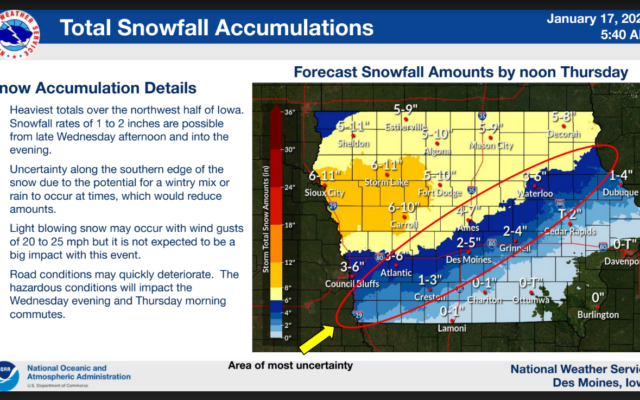 MASON CITY — Heavy snow is in the forecast for much of Iowa’s northwestern half. A Winter Storm Watch is posted starting Wednesday afternoon that lasts into midday Thursday.

National Weather Service meteorologist Rod Donavon says some areas of western Iowa could get nearly a foot of snow. The range for Sheldon is 5-to-11 inches of snowfall, while for Sioux City and Storm Lake, it’s 6-to-11 inches.  “Right now, we are looking at snow spreading northward across central and northern Iowa, especially late Wednesday morning and through the afternoon hours,” Donavon says. “Right now, it does look like we will have a period of one- to two-inch snowfall rates per hour by late afternoon and through the evening hours, so during that timeframe, travel certainly can be quite hazardous.”

It’s still not certain how much snow will fall and where, but Donavon says some areas could see significant depths.  “Snowfall amounts are generally in that five-to-nine inch range and that would certainly include large portions of the Highway 20 corridor and northward, lesser amounts to the south, especially as you get towards the Des Moines metro,” Donavon says. “We could have some mix of rain into the forecast as well. That could lower snowfall amounts with that.”

The wind should not be a big problem in this storm, at least compared to the pre-Christmas blizzard a few weeks ago.  “The system will be pulling out on Thursday so some light snow may remain during then, but otherwise generally seasonal conditions as we go into the weekend, as we have temperatures generally in the 20s across the area, maybe some 30s south, but for the most part, little to no precipitation until maybe into the late weekend, and most of that’s probably going to be southern Iowa.”

Road conditions may quickly deteriorate during the storm. The commutes on Wednesday evening and Thursday morning will likely be impacted.

Check road conditions on the front page of kglonews.com.