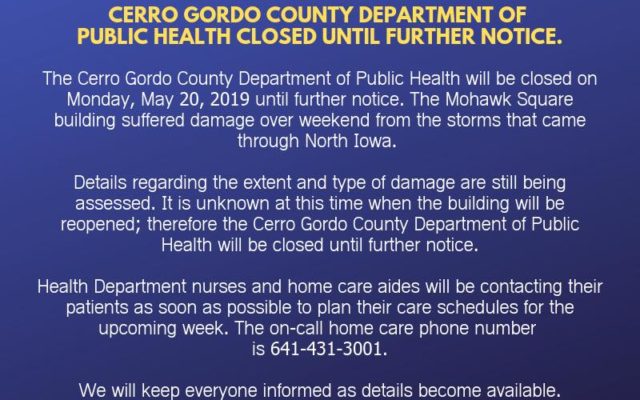 MASON CITY — Heavy rain over the weekend took its toll on one downtown Mason City office building. Mohawk Square has been closed until further notice after the building suffered damage from a roof collapse from the storms that rolled through over the weekend.

The Cerro Gordo County Department of Public Health, which has their offices on the third level of the building, says the details regarding the extent and type of damage to the building are still being assessed, and it’s not known at this time when the building will be re-opened.

The Public Health offices will be closed until further notice. Health Department nurses and home care aides will be contacting their patients as soon as possible to plan their care schedules for the upcoming week. The on-call home care phone number is 641-421-3001 (note this phone number is correct rather than the phone number listed in the photo attached with this story).

The Elderbridge Agency on Aging and the Iowa Department of Correctional Services offices are also closed.