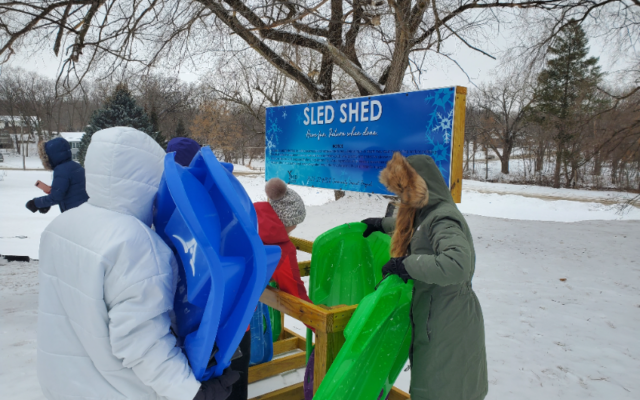 MASON CITY — Before the snow started to move in on Wednesday, the Mason City Chamber of Commerce’s Youth Investing Energy in Leadership Development group completed their community impact project by installing “sled sheds” at the city’s two sledding hills at East Park and Georgia Hanford Park.

The YIELD program develops leadership skills in promising young adults who are juniors at either Mason City High School or Newman Catholic High School by forging a connection between youth and the business community.

Angelina Frank of Mason City High School says “sled sheds” use the same concept as a popular book program.  “Similar to the little free libraries around town, this is like a little free library for sleds. You can take one to sled on while you are here, and then you put it back when you are done.”

The students researched other cities with similar projects, consulted with city staff and presented their project to the city’s Park Board to get their approval to install the sled racks. Home Lumber & Builders donated the wood, and Frank says it took them a while to construct the racks.  “It was a very difficult project to put together, because it took a lot of extra time actually building the rack. We only meet once a week, and about every other week is our actual work sessions, so there were several people that had to take extra time to go help make this project. We hope people really enjoy this.”

Frank says the group wanted to do a project that would not only offer a fun winter activity for north-central Iowans, but it will provide sleds to visitors or to those who may not have access to a sled.   “One of the other common options that we had for our project was providing local businesses, but we really wanted to cater to the Mason City community by giving instead of asking people to buy things, so we ended up picking the sled shed to try and make it so you didn’t have to give anything to be a part of our project.”

Thanks to a generous contribution from a local trust, students were able to purchase building supplies, signage and new sleds. Those new sleds were already being used later on Wednesday afternoon after students were dismissed early from school.