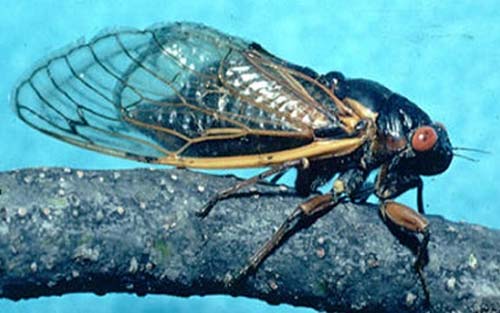 AMES — You may’ve heard the buzz about the mass return of the insect known as the cicada after 17 years in the ground.

Iowa State University Entomologist Donald Lewis says the emergence will be from Indiana to the east coast — but Iowa has to wait until 2031 for the periodical cicada to return. “Back in 2014, the periodical cicadas emerged in the southeast portion of the state of Iowa, from about Ledges State Park southeastward toward corner of the state. So they have been in the ground for only seven years — and we have another decade to wait,” Lewis says.

Thousands of periodical cicadas emerge at one time and cover trees and other objects. Lewis says there is an annual cicada that we will soon see here. “It’s the one that appears about the middle of July and is present until frost. It makes the familiar Zuh-zuh-zuh-zuh sound up in the trees, and then disappears in the fall of the year,” he explains.

He says you may also find the old shell of the cicada around the yard. “When the nymphs come out of the ground after feeding on tree sap for their prescribed period, they cling to tree bark, or the side of the shed or a fence post and they shed their skin. They shed their exoskeleton and a crack forms down their back. And the insect pulls itself out of its own shell,” Lewis says.

They then fly around until it is time to go back underground. There are not as many of the annual cicadas. Lewis says the purpose of the insects isn’t exactly known. “Cicadas are probably a link in the food chain, but it’s not a terribly obvious one to us,” according to Lewis. “We are talking about big insects. The annual cicadas are at least an inch in length and about as big around as your thumb.” He says the periodical cicadas are about three-quarters of an inch long.

Lewis says a raccoon or bear or some other animal may eat cicadas — but they are too big for most predators to eat. While they may seem imposing — Lewis says cicadas are harmless to humans. “They’re not a pest to crops, they don’t feed on the garden vegetables and the fruits in the back yard. They can’t bite and they don’t sting — so their impact on people is fairly minimal,” Lewis says.

If you want to see the mass emergence of the 17-year cicada, you’ll have to head east to Indiana, Ohio, Kentucky, Tennessee, Pennsylvania, and some coastal states. The nymphs surface during late May and June.