Iowa turkey to be focus of White House ceremony 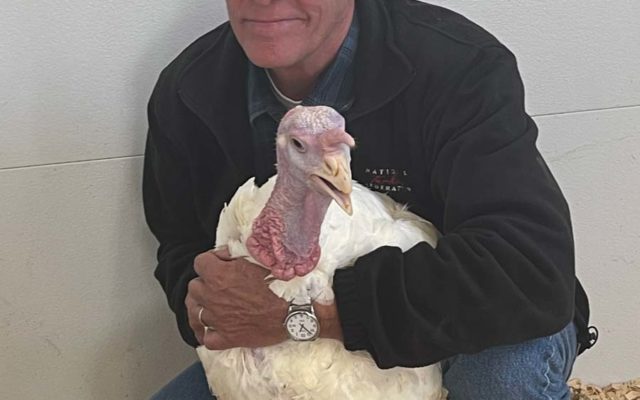 Ron Kardel and one of his turkeys

WALCOTT — This year’s National Thanksgiving Turkey is from Iowa and it will be presented to President Trump and the First Lady in a White House ceremony next week.

Morgan Minnehan, spokeswoman for the Iowa Turkey Federation, says the big turkey — along with a back-up bird — are from a farm in eastern Iowa and they’re being whisked away to Washington, D.C. for a few moments in the national spotlight.

“They will be leaving sometime Friday,” Minnehan says. “They will be driven out there in the back of a van with the seats down with some bedding so they’ll have plenty of room. They’ll make their way to D.C. and then the National Turkey Federation will treat them to a stay at the Willard Hotel.”

The two birds were raised by Ron and Susie Kardel  of Walcott, who will also be making the long trek to the nation’s capital. Minnehan says Ron Kardel, who’s a 1974 farm operation graduate of Iowa State University, is chairman of the National Turkey Federation.

“Ron and Susie will get to go and they’ll present the birds, since they raised them here in Iowa,” Minnehan says. “They’ll present them to the White House and take part in that event.” Neither of the turkeys have been named, which is something the president may decide to do during the event next week.

Whichever turkey is presented to the president, the plan is for it to be “pardoned” and sent back to Iowa, along with the alternate turkey. Early in December, Iowa State University’s Department of Animal Science will make the turkeys available for public viewing at the Ames campus, as well as for student engagement, teaching, and outreach activities.

“When the turkeys come back to Iowa State, they’ll have their own space here and they’ll live roughly three years, is our guess, though some can live a bit longer,” Minnehan says. “They’ll live out the rest of their natural lives in a comfortable space made just for them.” The turkeys will make a round-trip journey of more than two-thousand miles, from Iowa to Washington, D.C., and back.

“It does seem a little silly,” Minnehan says. “I’ve had so many comments like, ‘This is crazy,’ ‘Are you serious, they get to stay at a hotel,’ but it’s really a celebration of our industry, the turkey industry. It’s really fun for us to do and it’s a chance for us to educate people about turkey and what a great time to do it.”

It’s the first time Iowa’s had the honor of providing the National Thanksgiving Turkey since 2008. Iowa is the seventh-largest turkey producing state in the nation with 130 turkey farmers. Iowa’s also the fifth-largest state for turkey processing.

The turkey industry is responsible for more than $10-billion in economic activity throughout Iowa.