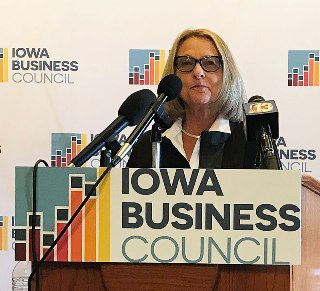 “The state is not keeping up with the talent demand of today and not also properly preparing the workforce needs for the future in the state of Iowa,” said Mary Andringa, chairwoman of the board at Vermeer in Pella and the current chair of the Iowa Business Council.

“We have phenomenal career opportunities in communities across Iowa and our state offers excellent quality of life,” Handley said Monday. “Nevertheless, we struggle to attract people to our towns and we don’t see the gains in population needed to support Iowa business.”

Iowa Business Council leaders held a news conference at the statehouse Monday to release what it calls the “competitive dashboard” signals in Iowa’s economy. It shows that in 2018 the productivity of Iowa’s businesses grew, as did the average household income of Iowans, but Andringa said the percentage of Iowans who have a college degree or some kind of training beyond high school was still “outpaced” by other states.

Iowa businesses, Andringa said, need more workers “from other states or other countries.”

“We just need to tell our stories to elected officials at the federal level, at the state level and what the needs are,” Andringa said, “because I think most of our elected officials are willing to listen and incorporate that into their thinking.” H

Handley said the U.S. immigration system needs to be “modernized” and “provide certainty” to businesses, workers and their families.

“Employers’ ability to recruit and retain talent from other countries is a key factor for both business and population growth,” he said. “…We feel it is absolutely critical for the business community to help our elected officials to understand Iowa business needs for workers in order to grow our economy and one way to meet this need is to thoughtfully bringing people into this country and into this state.”