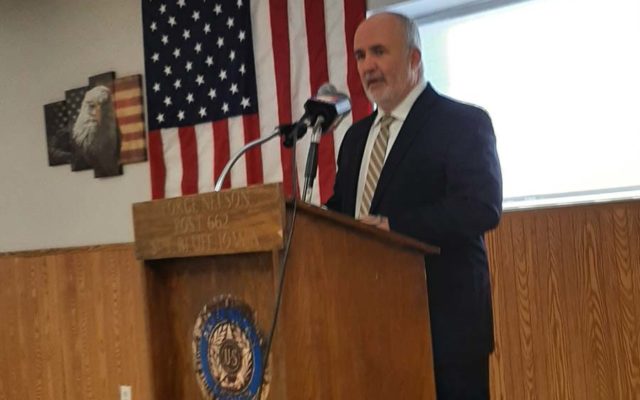 Carlin, who did not mention Grassley’s name, said Grassley and others in congress failed Americans by certifying Joe Biden as the Electoral College winner without first investigating President Trump’s claims of election fraud.

“Never again should the political class abdicate its responsibility to investigate and hold hearings when millions of Americans have doubt about the legitimate winner of an election,” Carlin said. “The people we relied on to tell us the truth let us down by not seeking the truth.”

Carlin, a 58-year-old trial lawyer and Army veteran, spoke Monday at the American Legion hall in Sergeant Bluff, but did not take questions after his speech. Carlin said he’s running for the U.S. Senate because there’s an assault on freedom in this country.

“In this campaign for the United States Senate, I will speak for Americans who cherish those freedoms and wish for a senator who’d fight for them, preserve them, protect them and advance them,” Carlin said, “those who want to worship God in the way they see fit and attend the church of their choice, those who find wisdom in the Bible and are tired of being called bigots, those who affirm that all have a right to life.”

Carlin said the most important institution in America is the family, but “wrong-headed” policies in Washington, D.C. are a threat.

“Our welfare system needs to be rethought and turned upside down,” Carlin said. “It penalizes parents who stay together. It fails to lift people out of poverty. It snares them into a cycle of dependence that goes from one generation to the next. The goal of welfare and public assistance should be to keep families together.”

Carlin also blasted China’s trade practices and called for a “NATO-like” pact among other nations to respond.

“In the face of this threat, we must maintain military superiority and rid American soil of Chinese espionage and spies who are stealing our technology,” Carlin said.

Senator Grassley, who is 87, has not announced yet if he’ll seek an eighth term in the U.S. Senate.