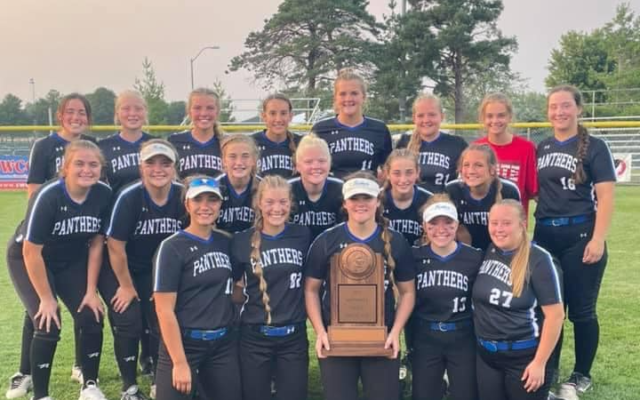 FORT DODGE — Central Springs bounced back from their semifinal loss on Wednesday by pounding out 14 hits and taking advantage of four errors in a 12-1, six-inning win over Wilton in the Class 2A third place game at the state softball tournament in Fort Dodge last night, as you heard on AM-1300 KGLO and kgloam.com. Abby Pate was 4-for-4 with a homer and four runs batted in while Madisyn Kelley homered for the third time in two games to lead the Panthers to their best state tournament finish in the program’s history. Central Springs coach Belinda Nelson says she was proud of the way her team rebounded after Wednesday’s loss to eventual state champion North Linn.

Kelley was the lone Panther to make the 2A All-Tournament Team and Nelson says it was an honor well deserved.

Nelson credits her seniors for solid play through their five years, making the state tournament every season.

Nelson announced after Thursday night’s game that she will be stepping down as Central Springs’ softball coach.

Nelson says she was proud that her program was able to have its best finish in its history in her final season at the helm.

CLEVELAND (AP) — The Tampa Bay Rays added a big bat for the stretch drive, acquiring slugger Nelson Cruz from the Minnesota Twins. Moments before opening a four-game series at Cleveland, the Rays announced they got Cruz and minor leaguer Calvin Faucher from Minnesota in exchange for minor league right-handers Joe Ryan and Drew Strotman. The 41-year-old Cruz has 436 career homers and will bring some pop to Tampa Bay’s lineup. He’s batting .294 with 19 homers and 50 RBIs this season. The Rays entered Thursday one game behind first-place Boston in the AL East

MINNEAPOLIS (AP) — Jack Mayfield hit a three-run homer and Andrew Heaney finished seven innings for his longest start of the season, leading the Los Angeles Angels past Minnesota 3-2. Heaney gave up just four hits, two walks and two runs with seven strikeouts for his most effective appearance in six weeks. Heaney fell behind 2-0 in the fourth, but Mayfield picked him up with his big hit in the following inning against Twins starter Kenta Maeda.

INDIANAPOLIS — Big Ten commissioner Kevin Warren says there could have been better communication but he does not regret any of the decisions he made during the pandemic in 2020. Warren received heated criticism after first canceling the football season and then reversing course and starting a shortened season in late October.

Warren made his comments at the start of Big Ten football media days in Indianapolis. He also sidestepped a question on whether the conference supports a plan to expand the College Football Playoffs to 12 teams. He says there are a lot of people to visit with.

Big Ten play for the University of Iowa starts right away on September 4th with their first game of the season against Indiana.