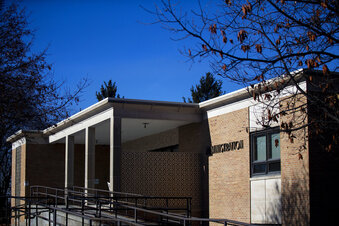 FLE - This undated photo shows the outside of the Glenwood Resource Center administration building in Glenwood, Iowa. On Thursday, Dec. 1, 2022, the U.S. Justice Department announced a settlement with the state of Iowa to resolve allegations of abuse and inadequate care at the state-run Glenwood Resource Center, a center for people with intellectual disabilities. (Kelsey Kremer/The Des Moines Register via AP, File)

GLENWOOD, Iowa (AP) — The U.S. Justice Department has announced a settlement with the state of Iowa to resolve allegations of abuse and inadequate care at a state-run care center for people with intellectual disabilities.

A proposed consent decree announced Thursday would see an independent monitor appointed to assess the state’s compliance at the Glenwood Resource Center.

The Justice Department found in 2020 that the center likely violated the constitutional rights of residents by subjecting them to human experiments — including sexual arousal research.

That report identified broad failures at the center, including poor treatment of residents and failure of the Iowa Department of Human Services to respond.