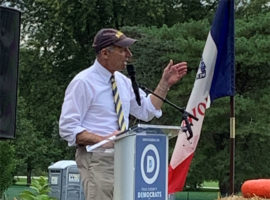 Strope-Boggus filed the police report a month after the alleged incident and told the female officer that Franken “had an old-fashioned view about how to interact with women.” The police officer’s report said Strobe-Boggus “did not describe any sexual intent nor any intent to harm.”

Des Moines Police and an assistant Polk County Attorney determined the allegation of an assault was unfounded. The Gazette reports that during a campaign event in Cedar Rapids, Franken said the incident Boggus described to police “never happened.”

Strope-Boggus’ allegations were first reported by the conservative Iowa Field Report website. Radio Iowa has been unable to speak with Strope-Boggus, whose name was misspelled in the police report.

A news release the Franken campaign issued this weekend indicated Democratic congressional candidates Liz Mathis of Hiawatha and Christina Bohannan of Iowa City would be joining Franken Monday at the event in Cedar Rapids, but neither was present.

A spokesperson for Mathis told Radio Iowa details from the Franken campaign were not made available in time and Mathis attended a previously scheduled event. Mathis also has released a written statement, saying although investigators found that no criminal act occurred and the case was closed, “it is an important reminder that workplaces and law enforcement should encourage women to feel comfortable coming forward with any allegations of inappropriate conduct.” Mathis added that she has a “victim-focused and zero-tolerance stance against all forms of sexual harassment.”