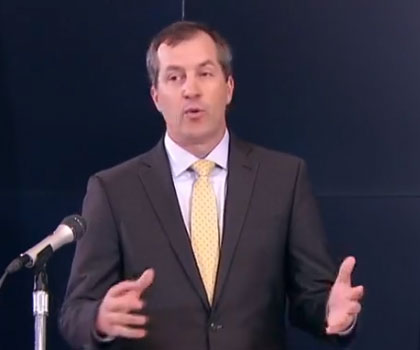 Iowa Ag Secretary Mike Naig says things could have been a lot worse if not for some rain that helped some of the dry areas. “Really the crop looks surprisingly good for the most part. Because we’ve really been dry throughout a lot of the state —  with the exception really of southeast Iowa — which has consistently had more or too much rain,” Naig says.

Things still remain very dry in areas of the state, and overall Naig says we are still behind.  He says it is a long-term rain event that won’t be made up in one or two rain events, it needs to be rain throughout the fall. “But, things look good throughout most of the state,” he says.

Naig says some farmers are still trying to recover from last year’s derecho damage. “Whether we are talking about building sites or bins, or certainly the crops, most of those are insurable losses. Now again, farmers aren’t made whole. You don’t have 100 percent crop insurance coverage — so there are costs that farmers have had to bear,” Naig says.

Naig says there’s always added costs as you are rebuilding bins and other things, and that keeps the burden of the storm recovery going into this year. Naig made his comments during a recent interview at the Iowa State Fair.