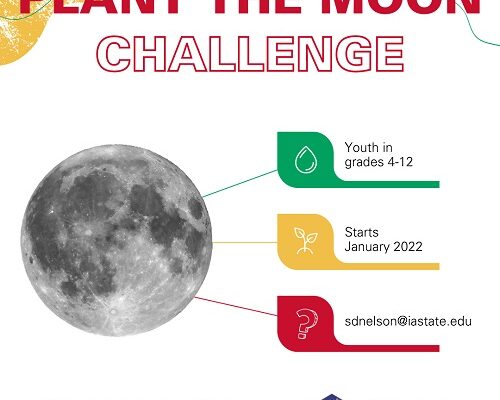 AMES — If you saw the blockbuster 2015 movie, “The Martian,” you’d understand how difficult it is to grow anything on another planet, and a new competition aims to test our abilities to do just that — but closer to home.

Sara Nelson, with the Iowa Space Grant Consortium, says the “Plant the Moon Challenge” is a global experiment to see who can grow the best crops using simulated lunar soil.

“Some of the goals are, first, just to get people excited about STEM and science in general,” Nelson says, “And second, to hook them up with a real question, something that scientists are truly trying to solve right now. When they do their experiments, they’ll send their information back to NASA and that gets added into this database, so what they do will matter.”

Nelson, the consortium’s assistant director for education and outreach, says the program is open to anyone of any age, but the focus in Iowa is on students in grades four through 12 who will be signing up in groups of ten.

“The simulant costs about $400 and it comes with a project guide and other supplies from the group that’s sponsoring the contest,” Nelson says. “Iowa Space Grant Consortium will pay for ten groups, so as long as you sign up, kind of a first-come, first-served basis, your group would get that paid for.”

The simulated lunar soil — or regolith — is expected to be a combination of rocky, dusty, sandy dirt and even Nelson isn’t sure what the ingredients will be. Whatever it is, it won’t provide a very hospitable environment for plants — and that’s the root of the challenge.

“It’s not like what we would do here on Earth so there’s all of these different steps and pieces that need to fall into place,” Nelson says. “What’s exciting is we just keep advancing. There’s a lot of great research going on at NASA around crops and growing food in space. Every step we take is just one step closer to landing on the Moon in 2024 and then going on to Mars.”

Entries are being accepted now. The program kicks-off in February with experiments being conducted in March through April. Teams must prepare and submit a report for NASA scientists by the end of April and a closing symposium and awards ceremony will be held in May.

Iowa native astronaut Raja Chari, who is scheduled for liftoff Wednesday to the International Space Station, is one of 18 astronauts named to NASA’s Artemis program, which is planning to return to the Moon.