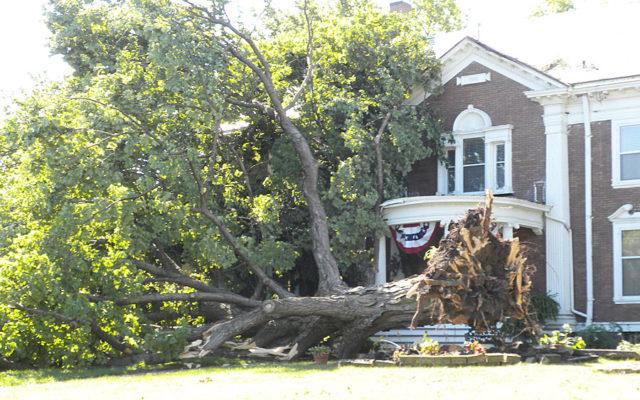 Tree knocked down in Des Moines by the derecho

DES MOINES — A bill being considered in the Iowa legislature would give utility companies more authority to trim trees and other vegetation around power lines.

Onnalea Kelley, a lobbyist for MidAmerican Energy, said it’s not just during bad weather that obstructions cause power outages. She presented data for MidAmerica’s Iowa service area during a House subcommittee meeting this morning.

“For the past 10 years, almost 10,000 tree-related interruptions totaling 72 million minutes of interruption time occurred,” Kelley says, “and this is only when the winds were below 45 miles an hour, so it was not considered a wind incident.”

If there’s no easement granting access to a property, the bill would grant utilities 10 feet of clearance around power lines in cities and 30 feet around power lines outside of city limits. Kevin Condon, a lobbyist for the Iowa Association of Electric Cooperatives, said in places where the RECs have no agreement about access, some “non-resident landowners” are refusing to let crews trim trees that endanger power lines.

The union representing line crews backs the bill, too. Nick Laning, a lobbyist for the state chapter of the International Brotherhood of Electrical Workers, spoke at this morning’s hearing.

“When trees rub up onto the wiring and get into the insulation, you have a hazard for fires and electrocution for workers,” he said, “so it’s a worker safety issue as well.”

“This bill is not about the August derecho, which was devastating for farmers,” said Kevin Kuhle, an IFB lobbyist. “This bill is all about property rights.”

Kuhle said a landowner has the right to determine what happens on his or her land and blanket easements will not provide appropriate compensation for landowners.

The bill has cleared subcommittee hearings and is eligible for consideration in House and Senate committees.