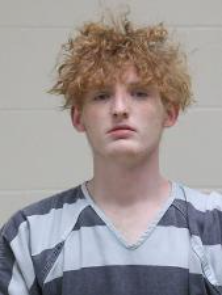 MASON CITY — A Belmond man charged with robbery and willful injury after an April stabbing incident in Mason City and failed to show up for his sentencing earlier this month is back in jail.

18-year-old Jaden Edel, 17-year-old Dominic Fogarty, and 17-year-old David Gordon were charged after two victims were held down, stabbed multiple times, and had property taken on April 1st in the 200 block of 15th Northeast.  All three originally pleaded not guilty to first-degree robbery, a Class B felony and willful injury causing serious injury, a Class C felony.

Edel entered into a plea agreement in late August, pleading guilty to two counts of willful injury causing bodily injury, a Class D felony. He was scheduled to be sentenced on January 5th in Cerro Gordo County District Court, but he failed to show up for the hearing, with court records also stating at the time that  Edel failed to report to his probation officer on December 6th as scheduled, and had failed to make contact since that time. A warrant was then issued for Edel’s arrest. Cerro Gordo County jail records show that Edel was taken into custody on Saturday and is being held on $5000 cash-only bond.

Fogarty as part of a plea agreement with prosecutors pleaded guilty to two Class D felony counts of willful injury causing bodily injury and was sentenced in December to five years probation.

Gordon was scheduled to be tried starting tomorrow, but a court document filed earlier this month showed that he reached a plea agreement and plans to plead guilty to first-degree theft and willful injury causing injury during a plea hearing to be held next Monday.