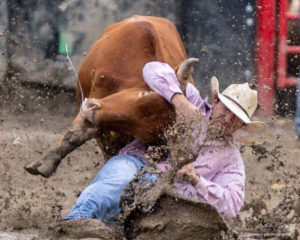 DAYTON — The Webster County town of Dayton will bring the flavor of the Old West to north-central Iowa over Labor Day weekend as the 85th annual Dayton Championship Rodeo starts this afternoon.

Clayton Bills, with the rodeo committee, says contestants come from all over the country for the event. Bills says, “Just from our production staff, some of our guys are coming from New Mexico, Missouri, Texas, Colorado, so it’s all over the United States.” The rodeo is held in the amphitheater at Dayton’s Oak Park, where Bills says they’ve made some changes just in time for the weekend.

“Every year, we like to try and do an improvement of some sort,” Bills says. “This past year, the committee was blessed with a grant from the county and they decided to improve the bottom row of seating. It’ll equal out to same amount of seating as what we had before on the bottom row and we have plans to extend that all the way to the rest of the hill.”

The events include bull riding, wild horse races, and something called “mutton bustin’”, which begin this afternoon and run through the holiday. (As above) “About four o’clock, the carnival will be opening up and the first performance will start at seven,” Bills says, “and followed by Saturday and Sunday at seven and then Monday, there’s a parade at 10 and the rodeo will start at 1:30.”