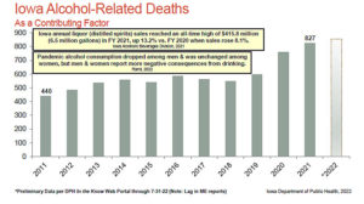 DES MOINES — Information gathered by the Governor’s Office of Drug Control Policy shows an increase in alcohol-related deaths from 440 in 2011 to 827 in 2021.

The director of the office. Dale Woolery, says the pandemic could be part of the reason for the increase. “I think some of that happened regardless of the pandemic, but the pandemic it seems, may have exacerbated, not just excessive alcohol use, but the use of other addictive or intoxicating substances,” Woolery says.

He says alcohol wasn’t the only issue during the pandemic. “For the two-year period, I think from 2019 to 2021, we saw increases pretty much across the board in alcohol-related deaths, opioid overdose deaths, stimulant overdose deaths, to include then all drug overdose deaths,” he says. “So I don’t know, you know, some of that again, and it’s hard to know how much of that might have been pandemic related.”

Woolery says there is one thing that stands out about the deaths linked to alcohol. “We see that a lot of those skew older as far as the age of the individuals. When we look at the drug overdose deaths, those are spread fairly evenly throughout different age groups,” Woolery says.

He says alcohol deaths are often part of a larger medical history. “Some of the alcohol deaths — and maybe many of them — involve chronic health conditions where alcohol contributes to or causes things, like liver disease, or heart disease, and other diseases that may take years to develop or manifest themselves to the point of causing death,” he says. He says the drug overdose deaths are usually much quicker — and more recently they can happen pretty quickly without long-term drug use.

Woolery says those who study this as a matter of cultural differences have historically found Iowa and other Midwestern states have had a track record of higher than average drinking with binge and excessive drinking included. “We trend in Iowa above the national average on things like binge drinking and nicotine use. By contrast, Iowa trends lower than the national average, and among the lowest states, actually, in terms of illicit drug use rates, and drug overdose death rates. So that gives us some context, that’s helpful, I guess,” Woolery says. Woolery says we might be relatively low for drug overdose deaths — but we have trended up over the last two years — so those numbers are not going in the direction we want. There were 258 opioid-related deaths in Iowa in 2021.

The ODCP gathers the information to create its report to the governor each year and it is used to set its drug control policies.