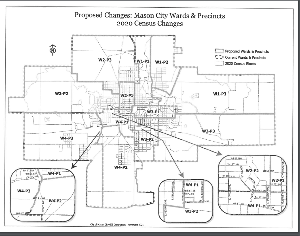 MASON CITY — Several items are on the agenda for tonight’s meeting of the City Council in Mason City:

== The council will hold a public hearing and then consider the first reading setting the map for the city’s wards and precincts based on data from the 2020 Census. City Administrator Aaron Burnett says in a memo to the council that changes in the boundaries compared to those set after the 2010 Census are minimal. He says no households will be impacted by the new boundaries, as the changes are in areas where there are no homes.

== The council will also be asked to approve an increase in fines for most parking violations to $20 and increase the cost of most overdue parking tickets to $30 starting on January 1st. Police Chief Jeff Brinkley says the city currently charges $15 for parking fines that are set by city ordinance, with that going up to $20 after not being paid after 30 days. Brinkley says they’ve been working on providing additional payment options for parking tickets with the addition of a credit or debit card payment being able to provide a higher level of customer service. He says offering the credit or debit card payment options does come with some additional fees, but the increased fine amount would help to offset that additional costs.

The council meets tonight at 7 o’clock in the Mason City Room of the Public Library.