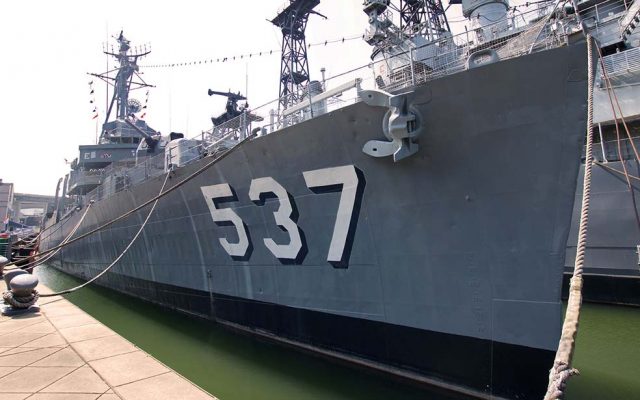 (file photo of USS The Sullivans)

BUFFALO — Starting Memorial Day weekend, visitors will be allowed back on the deck of the retired Navy vessel named for the five Waterloo brothers who died together in World War II. The USS The Sullivans — a floating museum in Buffalo, New York’s harbor — began sinking in April.

Buffalo Mayor Byron Brown says the ship was listing at 22 degrees. “The effort to save The Sullivans and the ship is righted and floating,” Brown says.

Crews pumped more than half a million gallons of water out of the ship, removed contaminants and began steam cleaning the ship two weeks ago. Buffalo’s Naval and Military Park will reopen Memorial Day weekend. Buffalo’s mayor says the emergency response is complete and the U.S.S. The Sullivans is now upright.  “A critical piece of naval and US military history that we are fortunate to have in our community.”

The five Sullivan brothers enlisted in the Navy in early 1942 and asked to serve together. They were killed about 11 months later when a Japanese torpedo struck their ship. The U-S-S The Sullivans was launched in April of 1943 and decommissioned in 1965. The ship was donated to Buffalo’s Naval Park in 1977.